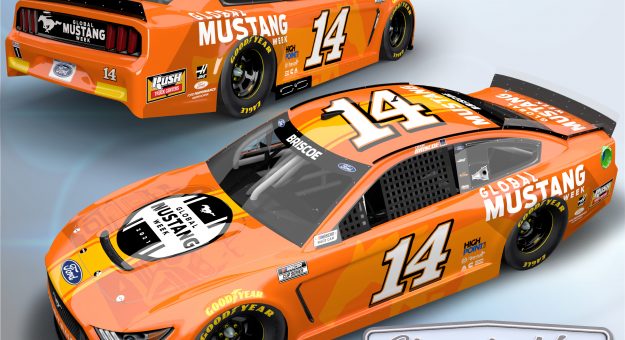 Rush Truck Centers returns to Chase Briscoe’s No. 14 Ford Mustang for the GEICO 500 at Talladega (Ala.) Superspeedway, this time joined by Cummins. The latter is the Indiana-based company from car owner Tony Stewart’s hometown of Columbus. It is a corporation of complementary business segments that design, manufacture, distribute and service a broad portfolio of power solutions. It is best known for its diesel truck engines. Since its founding in 1919, Cummins now employs approximately 61,600 people and serves customers in about 190 countries and territories through a network of some 8,000 wholly-owned and independent dealer and distributor locations.

Briscoe’s domination in the NASCAR Xfinity Series was on full display in both events at Talladega in 2020. In June, Briscoe started fourth, won the second stage, and was on pace to secure his fourth win of the year before being collected during an incident with 35 laps remaining.

The No. 98 team was as far back as 32nd but Briscoe powered his way back to salvage a 28th-place finish. In the October playoff race, he started on the pole and swept the first two stages while leading four times for a race-high 73 laps. With only three laps remaining, Briscoe had his sights set on his ninth win of the season and his third in a row, but he was forced into the turn four wall after his Ford Mustang received a nudge from the nose of Noah Gragson’s machine while protecting his lead.

A cut right-rear tire slowed the No. 98’s approach to the checkered flag and the team left with a 20th-place finish.

Briscoe leads the Cup Series Rookie of the Year standings by 54 points over Anthony Alfredo after eight races. With Rookie of the Year honors in the Truck Series (2017) and Xfinity Series (2019), Briscoe is looking to join Erik Jones and William Byron as only the third driver in history to claim the title in all three of NASCAR’s national touring series.

The No. 14 team has been making progress, but you haven’t been able to notch a finish that really shows that. Is this Sunday’s race at Talladega a chance to do so?

“Talladega would be a great chance to do that. You just never know what can happen on these bigger tracks,” said Briscoe. “Superspeedway racing is a different kind of game. You can hang around and take it easy and come out with a top-10 or race hard up front all day and get wrecked with two (laps) to go. I enjoy this type of racing, especially at Talladega where you can move around a little more than at Daytona. We have a car capable of running up front and getting a good finish. We’ll just have to stay out of trouble early on to have the chance to get upfront.”

Your first Cup Series start came on a superspeedway at Daytona earlier this year. The two tracks aren’t necessarily identical, so are you able to lean on your experience from earlier this year as you prepare?

“The biggest takeaway from Daytona was just how the Cup car races on a superspeedway,” Briscoe added. “I had no idea what I was doing and now I’ve got a few races under my belt. I know that it doesn’t take much to tear up a car and how it handles in the pack. Now I can take what I know from racing at Talladega and apply what I’ve learned about the Cup car, and just how these guys race, and that gives me a little more prep than I had going in the Daytona 500. I’m still trying to figure it out, but at least now I’ve got some idea of what to expect.”