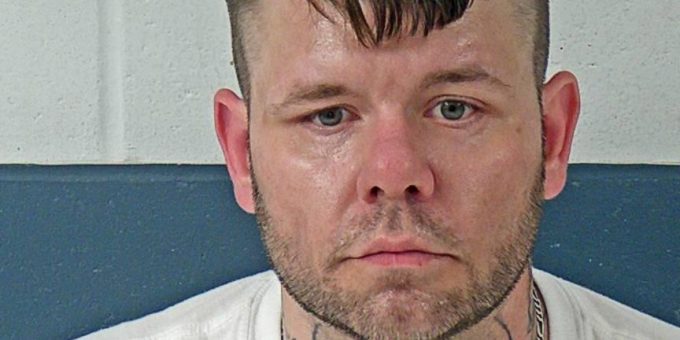 After ISP, BPD and the Lawrence County Prosecutor’s Office all received information that meth was allegedly being dealt out of a residence in the 1500 block of 6 ½ Street in Bedford, officers utilized various investigative techniques and were able to confirm illegal drug activity was taking place.

Monday, plain clothed officers observed Rankin, who had active felony arrest warrants through Lawrence County, in the yard of the residence working on a vehicle.

They notified uniformed officers of the location of Rankin and ISP A.C.E.S. Sergeant Greg Day, BPD Captain Jeremy Bridges, along with BPD Officers Jarrett Tedrow, Faheem Bade, and his canine Zazu, arrived at the residence.

As the uniformed officers were approaching the driveway, Rankin ran toward the residence and entered through a garage door. Officers gave chase and Officer Bade with Zazu, stood at the door while officers gave verbal commands for Rankin to exit. Ultimately, Rankin was located after acknowledging he did not want the dog released.

Upon execution of the search warrant, officers located approximately 10 grams of meth which was packaged for sale, an ounce of marijuana, drug paraphernalia, and other items associated with dealing drugs.

This case remains under investigation and additional arrests may be forthcoming.

Anyone with knowledge of illegal drug activity is requested to call the Indiana State Police Bloomington Post at 812-332-4411, the Lawrence County Prosecutor’s Office tip line at 812-545-4700, or send an email to drugactivity@lawrencecounty.in.gov. All calls are confidential.