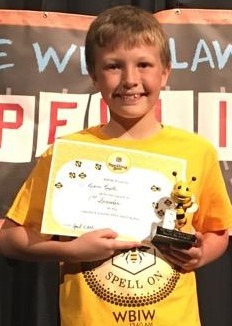 Ruple defeated other school champions representing grades 3-5 from Lawrence County to take the title after spelling the word hayloft correctly.

Placing second was fifth-grader Levi Woodward who is home schooled and Riley Mills, a fourth-grader from Shawswick finished third.

Officials say it was the shortest spelling bee in WBIW history only lasting three rounds.

Ruple will now move on to the second day of competition on Tuesday competing against the Lawrence County School champions representing grades 6-8.

The winner of this final round will be named the 2021 WBIW Lawrence County Spelling Bee Champion and receive $100 cash prize provided by WBIW, a pizza party for their home room class provided by Papa Johns Pizza, a tee shirt and the traditional spelling bee bobble head trophy.

The moderator of the event is WBIW 1340 A.M’s Talk of the Town host Sarah Turpen. Judges are WBIW President Holly Davis and Sales Lead Brandi Weyer.

If you can’t attend the event, you can listen to a playback of the competition on the airwaves of 1340 AM WBIW or stream online at WBIW.com and on Facebook both days at 6:30 p.m.

All participants receive a 1340 AM WBIW Spelling Bee t-shirt and a certificate. The top three contestants representing Lawrence County will also receive a bee bobble-head trophy. The overall Spelling Bee Champion will receive the above in addition to a $100 cash prize provided by WBIW and a pizza party for their home room class provided by Papa John’s Pizza.