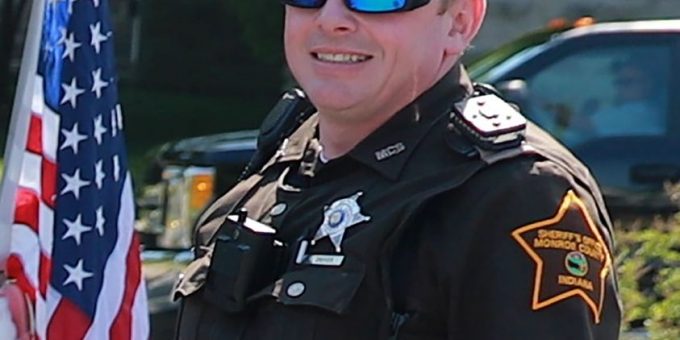 BLOOMINGTON – The investigation into the fatal crash, which claimed the life of Monroe County Sheriff Deputy James Driver, continues.

“Indiana State Police have determined that Deputy James Driver was wearing his seatbelt at the time of the crash, but due to the severity and extensive damage from the crash, Deputy Driver was ejected.”

Investigators are continuing to compile information and evidence from this event. At this time, there is no additional information to be released.

Efforts are being taken to raise funds for Deputy Driver’s family.

Deputy Driver was killed in an accident reported at 4:00 p.m. Monday on State Road 45, north of Eller Road in Monroe County.

According to an Indiana State Police report, 38-year-old Deputy James Driver, of Spencer was unconscious and unresponsive.

Deputy Driver was responding to a call and operating his 2018 Dodge Charger police vehicle with emergency lights and sirens activated.  While Deputy Driver was traveling south on SR 45, a 2006 GMC truck and trailer, driven by 22-year-old Christopher Derr, of Monticello, IL was traveling north in the area. Derr attempted to stop but lost control of the truck and traveled into the southbound lanes where the trailer collided with Deputy Driver’s vehicle.

After the impact, Deputy Driver’s vehicle rolled off the roadway before coming to a stop. The impact caused Deputy Driver to be ejected from the vehicle.

Emergency personnel transported Deputy Driver to  IU Health Bloomington Hospital where he succumbed to his injuries.

Derr and his passengers were not injured in the crash but Derr was transported to IU Health Bloomington Hospital for a voluntary blood draw and the results of those tests are pending.