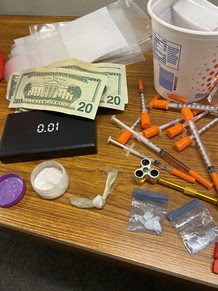 At approximately 3 p.m., an Indiana State Troopers went to a home in the 100 block of Teressa Street to locate 39-year-ld Michael Marino who was wanted on a warrant for batter.

The troopers found Marino hiding in a bedroom closet.

As a trooper attempted to arrest Marino he threw something under the bed.

Marino was arrested on the battery warrant, and new charges of dealing meth, possession of meth and possession of drug paraphernalia.

Around 10 p.m. that same night, a trooper stopped a Ford Ranger for speeding and a taillight violation near College Avenue and Cherry Street.

The driver, 48-year-old Shannon Bell, of Campbellsburg, and her passenger 60-year-old Carolyn Beatty, of Madison, was arrested after a trooper witnessed Bell throw a baggie of meth from the vehicle.

A second baggie of meth was located on the passenger floorboard. Police also found several syringes, drug paraphernalia, and marijuana.

Bell was also arrested on a warrant for possession of meth.

All three are being held in the Washington County Jail.

Trooper Eric Powers and Kyle Taylor were assisted by officers from the Salem Police Department and the Washington County Sheriff’s Department.