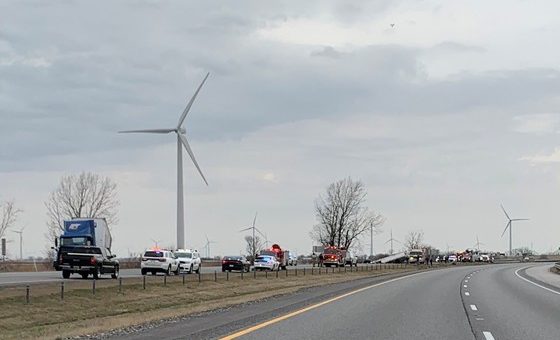 WHITE CO. – Tuesday at 11:00 a.m., Indiana State Police responded to a large fire that involved multiple vehicles on Interstate 65, southbound at the 187 mile-marker.

According to a preliminary investigation by Indiana State Police, a red 2017 Freightliner, pulling a tanker trailer containing a food-grade material, was driving northbound in the right lane on I-65 near the 187 mile-marker. For an unknown reason, the Freightliner swerved into the left lane and sideswiped a white 2014 GMC van, driven by 66-year-old James Harrington, of Thomasville, NC.

The GMC stopped in the median, and the Freightliner continued across the cable barrier and into the southbound lanes.

At that time, a blue 2019 Volvo semi-truck, driven by 56-year-old Frank Duran Jr., of Chicago, IL, was traveling southbound in the right lane, pulling two trailers. The Freightliner hit the two trailers, split one of them in half, and caught on fire.

The Freightliner and both trailers came to rest in the ditch on the west side of the southbound lanes. The Volvo continued southbound and stopped on the right shoulder.

The driver of the Freightliner was pronounced deceased at the scene by the Carroll County Coroner. The driver’s name is being withheld pending identification and notification to the family.

Harrington and Duran were both uninjured in the crash.