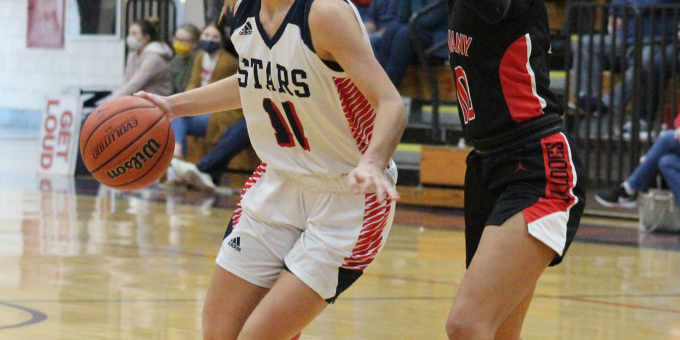 BEDFORD – Bedford North Lawrence senior Chloe McKnight, already a member of elite company as one of the top scorers in program history, joined another fantastic sorority on Monday.

McKnight was named to the 2021 Indiana All-Star squad, becoming the 10th player in BNL history to wear the prestigious jersey and represent the state in the series with Kentucky.

McKnight, a senior on her way to Saint Francis, averaged 13.7 points, 4.6 rebounds and 2.6 steals per game as the Stars finished 22-3. She also finished fifth on the school’s career scoring list. She now follows in the footsteps of BNL greats – including two Miss Basketballs – as a member of the All-Stars.

She was one of 14 chosen for the roster, which will be coached by BNL’s Jeff Allen.

“It means a lot to be in a category with the best girls in the state of Indiana,” McKnight said. “When I think of All-Stars, I definitely think of Jorie (Allen, the Miss Basketball in 2019), since I played with her. And some of the best players in Indiana, like Damon Bailey.”

McKnight was named to the Junior All-Stars last season, but the games with Kentucky were cancelled because of the virus outbreak. When the Stars fell to Franklin in the Class 4A regional final, she thought her chances for postseason awards ended with that loss.

“I didn’t think I would make it,” McKnight said. “I was shocked last year, and I wasn’t too sure I would make it this time. Not getting to go all the way, when we thought we could, I thought not going that far in the tournament would hurt me. But then the phone call came.”

McKnight was one of the feared perimeter shooters in the state, although she’s quick – and accurate – to point out her game has more facets. She was a member of four sectional championships and two regional winners.

”From an All-Star standpoint, I think you have to look at a kid and their overall body of work,” Allen said. “I think Chloe had an outstanding high school career.

“She’s played at a high level, she’s been in games where she has had to perform, and done well. What she brings to the table is outside shooting, she’s one of the best pure shooters in southern Indiana.

“But it’s her character. She’s going to be a great teammate, she’s going to do the best she can in her effort on the floor and representing Indiana off the floor.”

“I’ve played against a bunch of them, and they’re really good,” McKnight said.

McKnight’s presence on the roster will give Allen a liaison to translate his style and demands when the All-Stars convene to prepare to face Kentucky.

“That’s definitely a plus for me,” Allen said. “She knows exactly what I’m trying to accomplish. She’ll be able to help relay the message to her teammates. And I don’t think you can have a better kid on your bench that shoots the basketball and understands the game. Chloe has a great mind for the game. And if you get in a position to need someone to make a shot against a zone, she’s a great kid to have.

“As a team, we will have really good guard speed, which I like because at that level you want to play fast, get in transition. We have some good big people that are skilled, and our wings shoot well., That gives us a three-prong attack, and it’s my job to get it together in a short amount of time.”

The Indiana All-Stars will play a girls-boys doubleheader against the Kentucky on June 11 (in Kentucky) and June 12 (at Southport). They will also play a scrimmage with the Junior All-Stars.