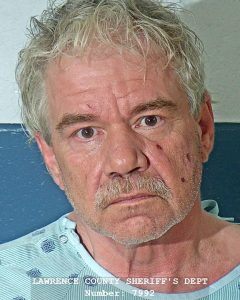 During the 2-hour and 15-minute interview videos, Deckard is visibly upset and crying.

During the first interview at the IU Health Hospital in Bedford, where Deckard drove Silvers to be treated for her injury, Deckard voluntarily relinquished his blood-covered clothing to officers.

Deckard explained that he and Silvers had been arguing all morning. He continued to explain that Silvers set the trailer on fire by pouring gasoline from the bedroom to the living room and then set fire to the carpet. Deckard then stated he doused the fire by filling a large tote several times with water.

He then tells Capt. Slone, Silvers continued to go in and out of the trailer. At one point, she got her hands on Deckard’s pistol and while outside she fires several shots at him. She then threw the gun down into a mud puddle. Deckard retrieved that gun from the puddle.

Deckard told Capt. Slone, Silvers had a terrible temper and they had actually split up at one time because of her temper.

Deckard said Silvers kept coming in and out of the trailer.

Just before she was shot, he told police Silvers entered the door and shoved Deckard causing him to stumble backward and the gun went off.

“There was so much shit going on, it was hell,” Deckard told Capt. Slone. “There is no way in hell I would have shot her. If you think I shot her you are wrong. It was an accident. I didn’t shoot her.”

He continued to claim the shooting was an accident.

“I have got nothing to hide. I didn’t do this dude,” said Deckard. “I really don’t know how she got shot. I was shoved backward and that was it. All I know is the damn gun went off.”

After the shooting, Deckard told Capt. Slone, “I grabbed her and moved her to the car. I saw the injury on her arm and got a towel and wrapped her arm. There was blood all over her. I tried to stop the bleeding. I snatched her up and told her to come on and took her to the hospital.”

Deckard consistently and continually repeated the shooting was an accident and that the gun fired when he was shoved backward. Capt. Slone continued to accuse Deckard of firing more than one shot at Silvers. Deckard denied that saying the rifle only discharged once.

“This was an accident it truly was. I would never hurt her,” said Deckard.

“I didn’t shoot her on purpose. You need to talk to her,” Deckard said.

That is when Capt. Slone responded, “That’s going to be hard to do because she passed away.” However that was not true , Silvers was still alive at that time.

After the interviews, Capt. Slone continued to testify about the DNA found on the weapons.

The crime lab did not find Silvers DNA on the pistol. However, they did find Deckard’s, Silver’s and an unknown third party’s DNA on the rifle.

A juror did submit a question to Judge Plummer and asked if there was mud or water on the gun. Capt. Slone replied there was.

Another juror asked where exactly on the rifle was Silver’s DNA was found. Capt. Slone said the DNA was found on the sling and on the under portion of the rifle.

A juror also asked if the carpet was wet from Deckard putting out the fire. Capt. Slone could not testify if it was or was not. He was unable to recall if he bent down to touch the carpet or not.

Capt. Slone was also questioned about the autopsy report which stated Silvers had used meth prior to her death.