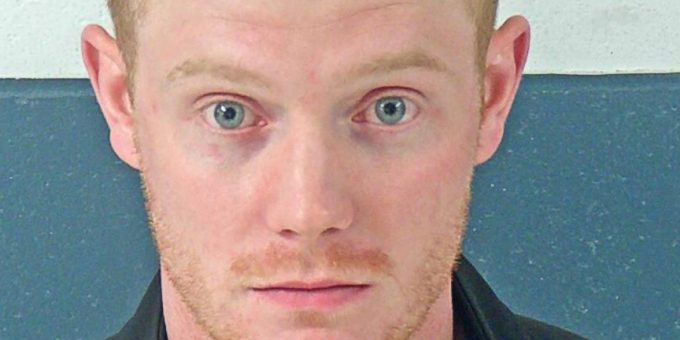 BEDFORD – A Bedford man was arrested on drug charges early Saturday morning after a Lawrence County Sheriff’s Department deputy stopped his vehicle after noticing one of the vehicle’s headlights was inoperable.

The vehicle was stopped on State Road 37 near the Dodge dealership.

The male driver was 28-year-old  Joseph Devinney, of Bedford.

The officer learned that Devinney’s driver’s license was suspended.

He told police he went to court where his driver’s license was reinstated but there may have been a fee he had not yet paid.

Officers then asked to search Devinney’s vehicle of which he denied that request. K-9 Dusty was on the scene and alerted officers to possible drugs in the vehicle.

In the backseat of the vehicle, officers found a pipe with meth residue inside a backpack.

Devinney told police he had borrowed the vehicle from a female and nothing in the vehicle belonged to him, to include the backpack. He stated he borrowed the car to go pick up his passengers at the Depot, a bar in Orange County.

However, police found other items within the backpack that would indicate it belonged to a man.

During an inventory of the vehicle, additional drug items were located in the vehicle that included a baggie with 0.5 grams of cocaine and a baggie of marijuana.