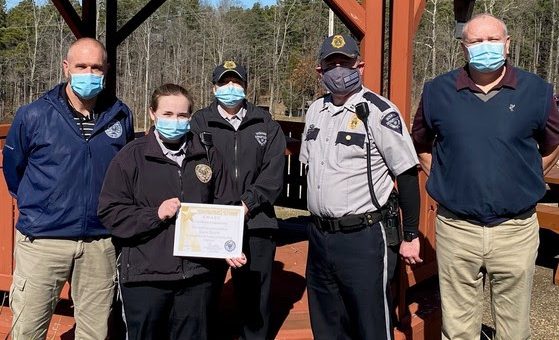 Officer Bryant began her career with the Indiana Department of Correction as a Custody Officer with Branchville Correctional Facility (BCF) on May 11, 2020.

Officer Bryant was nominated by Deputy Warden (DW) Dan Mitchell for the Rising Star Award. In DW Mitchell’s letter, he said, ” Officer Bryant has proven herself to be a very versatile custody officer. She has worked numerous posts and excelled in each new situation. Officer Bryant has earned her supervisor’s faith and confidence in her ability to complete any assigned task.”

Officer Bryant maintains a professional demeanor at all times when working with the offender population, her colleagues, and staff at BCF. DW Mitchell’s letter went on to state, “I have observed Officer Bryant during stressful conditions when on duty, she maintains her composure and completed the task quickly and efficiently.” She is a respected member of the custody team.

Officer Bryant is a motivated, professional, diligent, and reliable staff member for the Indiana Department of Correction. Her work ethic, attention to detail, and consistency make her a true Rising Star.