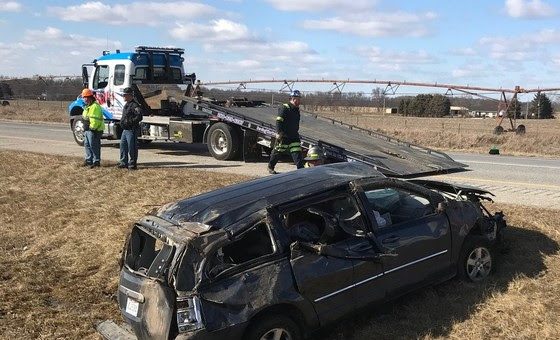 STEUBEN CO. – At approximately this Thursday afternoon, troopers from the Indiana State Police Toll Road Post responded to a single vehicle crash on the Indiana I-90 Toll Road near the westbound 135-mile marker, Steuben County, Indiana.

The male driver and his four children, ages ranging from 2 to 9-years-old were injured.

Two of the children were flown from the scene by Parkview Samaritan helicopter to a Fort Wayne area hospital. The father and other two children were transported by ambulance to the same hospital.

According to a preliminary investigation 43-year-old Luke Christopher Peterson, of Cleveland, Ohio was traveling west on I-90 at a high rate of speed when he lost control of the Dodge minivan.  The minivan ran off the road into the center median and then rolled several times before stopping.

Witnesses told troopers they saw the driver of Dodge minivan recklessly driving at a high rate of speed and swerving in and out of traffic prior to the crash. Witnesses stated that the minivan swerved to avoid striking the rear of a semi-tractor trailer prior to running off the highway into the median.

Trooper found no safety seats in the vehicle and is unsure if anyone was wearing a seatbelt because the driver and children had been removed from the vehicle before his arrival. The airbags did deploy.

Traffic on the I-90 Toll Road was shut down temporarily in both directions for nearly two hours while troopers and first responders managed the scene.

Both excessive speed and alcohol are suspected as contributing factors in the crash. The accident remains an active ongoing investigation. Once a thorough investigation has been completed, a full report will be turned over to the Steuben County Prosecutor for review and determination of charges to be filed.