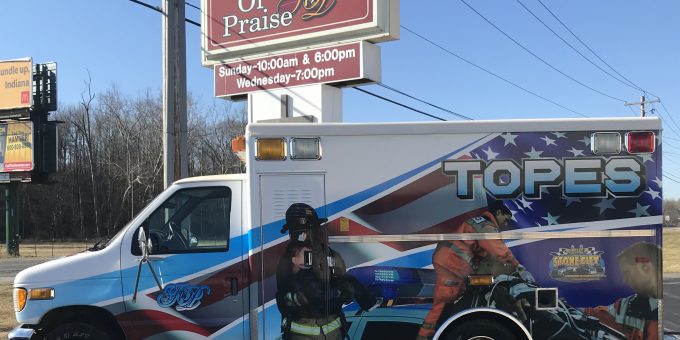 LAWRENCE CO. – Lawrence County has a valuable resource in times of emergencies or disasters.

Tabernacle Of Praise Emergency Services (T.O.P.E.S.) has responded to incidents in Lawrence County and provided this service to other counties for more than 15 years.

Originally, a canteen was started by Jack Voightschild and the Salvation Army back in the late 1980s when Jack started working out of his own personal vehicle bringing refreshments and food to emergency responders.

The service evolved and began to also provide chaplain services to families of accident victims as well as serving death notifications.

Due to health reasons, Jack need to step away and allow someone else take over the service.

Tabernacle of Praise Church, along with minister Ray “Boomer” Christy, decided to take over this valuable service to emergency responders, disaster victims, and their families.

This is a free service that is provided by all volunteer labor.

“The reason why I do it is to be able to help those in times of need, and try to mitigate negative circumstances,” said Christy.

Christy was later joined by his wife, Vicki, to help him with the tasks associated with this service.

“I like providing this service, most of my life I have worked in social services. I am pleased to help him, and support his efforts,” said Vicki Christy.

T.O.P.E.S. is called upon an average of 25 times a year, and sometimes more depending on the number of incidents that happen in the county.

In the past, T.O.P.E.S. has responded to large fires in Bedford, including large fires like those at the former George’s Gateway and the Central Church of Christ.

However, most of his time is spent assisting local volunteer fire departments at large fires or incidents within Lawrence county.

In addition, other surrounding counties have called upon the service when their counties have large-scale incidents or incidents that take several hours or days to mitigate.

The unit brings drinks, such as Gatorade and water, and usually works with local restaurants to bring some kind of food to the incident. In the wintertime he takes hot water, to make coffee, hot chocolate, or cappuccino. A thermal pumper helps distribute the hot drinks.

He also provides care to the property owners and their pets.

Christy has taken several courses to be able to understand emergency response including Incident Command System, and National Incident Management System training (NIMS). He said this training is important to interact with the various responders and be able to properly work within these large-scale incidents.

He is an ordained minister through the Full Gospel Church International and serves as a chaplain when called upon at emergency scenes.

Christy started working out of his own vehicle and was eventually provided a used ambulance donated by Indiana University Health Hospital to respond to these incidents about eight years ago.

T.O.P.E.S. relies solely on donations and operates within a limited budget to purchase fuel and supplies for the unit.

To raise funds for the service the church youth helped at the Lawrence County Fair parking cars one year.

Tabernacle Of Praise Church has received funds specifically donated to support the service and other organizations have also provided donations.

Lawrence County Volunteer Fire Association which has since disbanded also contributed to T.O.P.E.S.

“It is a honor and privilege to serve our community,” said Christy.

Ray is semi-retired and just operates a home business on the side, his wife Vicki is retired after working in social services and a with a Fort Wayne law firm.

Ray says he is 70 years old and will have to start looking for another person to eventually take on this role.