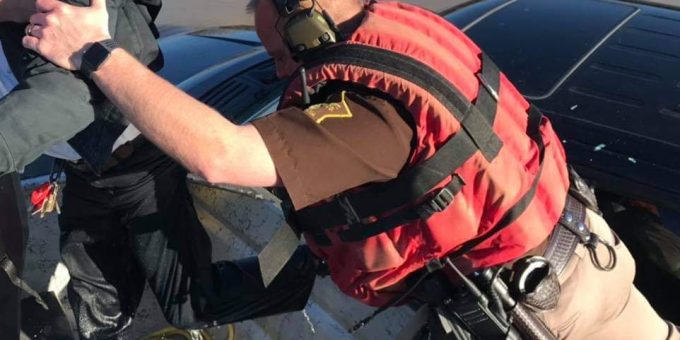 CORTLAND – A driver was transported to Schneck Hospital after driving in flooded waters south of Cortland Tuesday afternoon.

This incident occurred just south of Cortland, near the Cortland bottoms according to officials.

The driver was cited by Jackson County Sheriff’s Department for driving his vehicle into flooded waters and ignoring the warning signs that were posted.

This will make the second driver that has been cited for the dangerous behavior that puts motorists at risk as well as the rescuers who respond to these types of incidents.

Indiana Conservation officer Blake Everhart used his airboat to reach the stranded motorist and had to break the window of the vehicle to rescue the victim from the truck.

This would make the fifth water rescue in Jackson County over a two day period.

“We have looked into several options of trying to address this dangerous behavior which puts our personnel at risk,” said Jackson County Sheriff Rick Meyer.

The citation issued is a $500 fine for the ordinance violation. The Jackson County Council tried to raise that fine up to $1,000 in February of 2019, however that measure did not pass.

Elected officials proposed the increased fine after 15 people became trapped in flood waters during December of 2018 and had to be rescued.

Emergency officials ask that motorists ” Turn Around and Don’t Drown” when they come to flooded roadways.