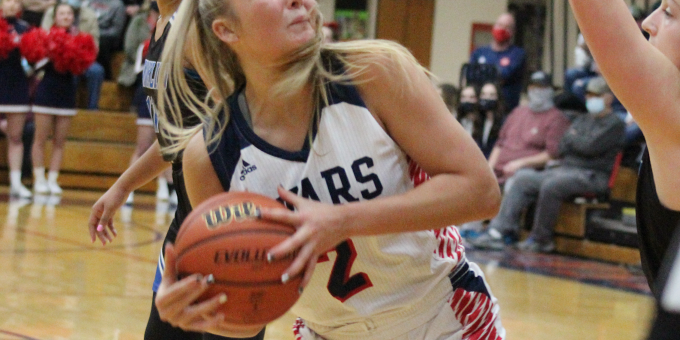 BEDFORD – The stage was huge, but not for the Franklin flashy freshman kids. And remember the name Kuryn Brunson. Bedford North Lawrence won’t forget her, or the pain she inflicted, for a long time.

With a regional championship at stake, Brunson was a hero, scoring Franklin’s final seven points and ripping the heart out of the Stars, who came up agonizingly short as a remarkable season ended in tears.

Brunson dominated the final minute, finishing her 24-point night and finishing off the No.3 Stars, powering the No.7 Grizzly Cubs to a thrilling 51-48 triumph on Saturday night. Franklin (22-2) advanced to the one-game semistate on Feb. 20 to face Brownsburg in the Class 4A Final Four at Jeffersonville.

For the fourth straight time in a regional on its home court, BNL suffered the ultimate agony as an opponent sheered off the nets in celebration. The Stars (22-3) were in position, clinging to a three-point lead with 1:50 left, holding a 48-47 edge with 21.6 seconds remaining. Franklin wrestled that title trophy away, leaving BNL in torment.

“It’s a tough loss,” BNL coach Jeff Allen said. “We had a good chance to do something special. Not that we didn’t, but we left everything on the table and came up a little short. It’s a tough night. It will sting for a long time.”

BNL seemed destined for greater glory when Karsyn Norman’s right-wing 3-pointer spun in, after hopping three feet above the rim, for a 44-41 advantage – BNL’s first look at the lead since the opening minutes of the second half. The Stars seemed preordained for splendor when Norman crashed through traffic for a 3-point play and the 48-47 edge with 21.6 left.

Franklin, with three freshmen on the floor, didn’t blink. The Cubs found Brunson, who bulled into the paint and drew a foul with 11.9 seconds left. The junior, a 65-percent shooter from the line this season, calmly swished a pair.

BNL’s response ended in disaster as Norman’s quick look up the court was batted away by Brunson. She was fouled again, and repeated her clutch performance with two more clinching free throws with 1.8 seconds left. When Chloe McKnight’s desperate heave from the backcourt banged off the backboard, Franklin rushed to a group hug in celebration of its first regional title since 1999.

“Oh my gosh, the best. It’s awesome,” Franklin coach Josh Sabol said, his wide grin obvious under the face mask. “In a hostile environment, to come on the road and win. Awesome.

“She’s a Junior Indiana All-Star, not enough people know that. You need to know that name. Kuryn Brunson.”

For a team that made its name on shooting the 3-pointer, Franklin played sensational defense. The Stars, usually displaying a slick, synchronized, organized offense, were reduced to standstill frustration.

“It just wasn’t our night,” Allen said. “We couldn’t get in a groove. Even when we fought tooth and nail and got back, we couldn’t get things to go our way. There’s going to be nights like that. For Franklin, it was their night.

“We didn’t shoot the ball very well. We took some rushed shots that were kind of bad shots, and that was part of the fact we weren’t making them. We felt some urgency to correct that.”

BNL had some control early, muscling to a 16-11 lead three minutes into the second quarter on Chloe McKnight’s wing trey and Chloe Spreen’s two free throws. Franklin answered with its expected attack, the 3-point bombs, with Scarlett Kimbrell swishing a pair and Lauren Sandrock rocking the Stars with another. BNL clawed within 22-21 at the half on Irye Gomez’s corner trey.

The Stars took a brief lead early in the third quarter on a Spreen rebound basket, but that’s when Brunson started to assert herself. She dropped a 3-pointer, found teammate Megan Thompson for another, and streaked to a fast-break layup for a 39-32 lead as BNL trembled.

The Stars regrouped with Gomez scoring on a rebound basket, withGomez hitting another trey from in front of the BNL bench to end the quarter. She stayed hot with a corner bomb for a 41-41 deadlock. That set the stage for the frantic conclusion – which included a clutch trey from freshman Erica Buening for a 44-44 stalemate – that ended in BNL misery and Franklin jubilation.

Brunson was 7 of 8 from the line in the final quarter. Buening finished with 10 points. The Cubs, who set state records for 3-pointers this season, were only 9 of 32 from that range, but they found other avenues for this victory. One of the ways was rebounding, with 10 offensive boards. Another was outstanding defense as BNL shot a miserable 13 of 35.

“Everyone wants to talk about our offense, but we can play ‘D’,” Sabol said. “We can rebound, and I thought we did that pretty well.

“We want to play fast, but there’s also times to get into something and get a good shot. Offense is our calling card, but if you’re a winning team, you have to find different ways to win. And we did that tonight.”

Spreen was stellar again with 18 points, Gomez totaled 11 and Norman finished with 10. The Stars were only 6 of 22 from long range and got outrebounded 29-24.

For BNL, which had visions of a deeper run and possible shot at the grand prize, the sudden loss and conclusion was a gut punch.

“I don’t know if I have the words,” Allen said. “I’m sad for my senior class, sad that it’s over because we were having a lot of fun. I thought we battled and played hard.

Brownsburg, which stunned No.1 North Central in overtime in the regional semifinal, advanced to clash with Franklin with a 44-35 win over Mt. Vernon (Fortville) in the final at Decatur Central.