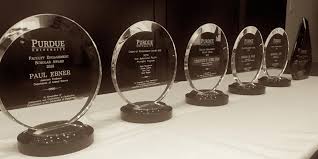 The Purdue WIA team annually recognizes women in Indiana who are leaders, innovators and significant contributors to the success of Indiana’s agriculture industry.

The nomination form and requirements are found at puext.in/WIA. Nominations must be submitted by May 1. Applications and letters of support may be sent to Lori Bouslog, lbouslog@purdue.edu, or Beth Vansickle, bvansickle@purdue.edu. Self-nominations or nominations from others are acceptable.