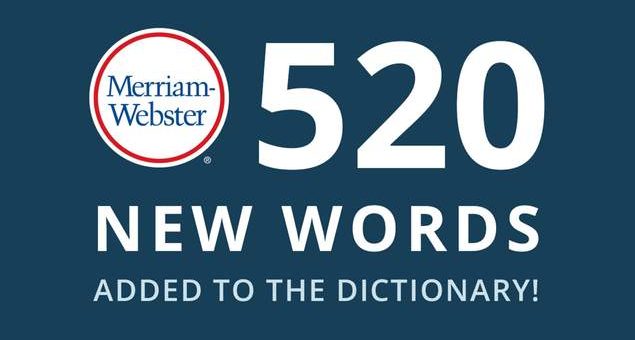 (UNDATED) – Today more than 520 new words and meanings have been added to Merriam-Webster.com, the dictionary helping millions of people understand and use language better.

These new words and definitions offer a snapshot of how the language evolves, as they reflect back to us facts about our experiences and circumstances.

“Language is a measure of culture, but also, in many ways, language can be a measure of time,” explains Peter Sokolowski, Editor at Large for Merriam-Webster. “The new words a language’s speakers choose to adopt are the words they need to express themselves and to explain their world. When enough of us use these words to communicate, it becomes the dictionary’s job to catalog them and report on how they are used.”

More on How a Word Gets Into the Dictionary, plus an Infographic.

The COVID-19 pandemic that has shaped our lives for the past year is shaping our language as well. This update includes new meanings of pod and bubble: each can refer to a small group of people who regularly interact closely with just one another in order to minimize exposure and reduce the transmission of infection. In addition, bubble has a new sports meaning as well, referring to the particular kind of isolation sports teams have orchestrated to continue playing during the pandemic. Speakers require the language to respond to the devastating effects of the disease itself as well: the term long-hauler describes someone who experiences one or more long-term effects following initial improvement or recovery from COVID-19 or any serious illness.

But while the pandemic may dominate the current era, other additions to Merriam-Webster.com remind us that there are many things going on. Second Gentleman, defined as “the husband or male partner of a vice president or second in command of a country or jurisdiction,” has met our criteria for entry, as has cancel culture, “the practice or tendency of engaging in mass canceling as a way of expressing disapproval and exerting social pressure.”

The word decarceration has been entered, thanks to its recent prominence; we define it as simply “release from imprisonment,” and also as “the practice or policy of reducing the number of people subject to imprisonment.”

Two other new additions are so closely tied to their written form that their very existence owes a debt to the prevalence of our online communication: @ (less commonly written as at) is a new verb that usually appears in the phrase “don’t @ me,” and means “to respond to, challenge, or disparage the claim or opinion of someone.”

The word folx is auditorily indistinguishable from folks, but it has found a place for itself in the written language where it explicitly signals the inclusion of groups commonly marginalized.

Meanwhile reaction GIF refers to a particular kind of digital reply, and digital blackface offers commentary on how some such replies can be considered problematic.

Social media has popularized hard pass, defined as “a firm refusal or rejection of something (such as an offer),” as well as ASMR (which stands for autonomous sensory meridian response): “a pleasant tingling sensation that originates on the back of the scalp and often spreads to the neck and upper spine, that occurs in some people in response to a stimulus (such as a particular kind of sound or movement), and that tends to have a calming effect.” ASMR videos, which trigger such a sensation, are watched by millions of YouTube and TikTok fans.

While most people who can work at home are doing so these days, we haven’t stopped talking about a return to a time when people work together in person again. Coworking has been entered in the Merriam-Webster.com dictionary, as has makerspace, “a communal public workshop in which makers can work on small personal projects.”

Other notable additions include hygge (“a cozy quality that makes a person feel content and comfortable”) and Jedi, defined as “a person who shows extraordinary skill or expertise in a specified field or endeavor,” as well as silver fox (“an attractive middle-aged man having mostly gray or white hair”), and sapiosexual, defined as “of, relating to, or characterized by sexual or romantic attraction to highly intelligent people.”

See a larger selection of new words added—and their definitions—here.

New t-shirts and merchandise related to these new words, including a “hard pass” design, are available in the Merriam-Webster Threadless Shop.