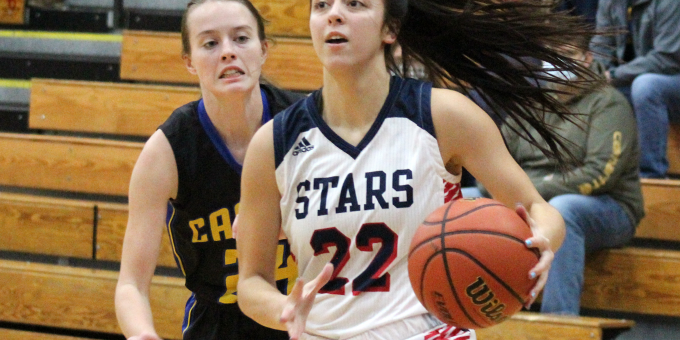 BEDFORD – Borrowing the immortal words that signify the start of the greatest spectacle in racing, modified for this sport: Ladies, start your engines.

High-speed basketball is Bedford North Lawrence’s forte. Press the pedal to the metal, pressure the ball, shift into transition gear and stroke it from distance. That’s also Martinsville’s strength. So get set for a super-charged clash in the regular-season finale. No restrictor plates.

The No.3 Stars will make the finish line – something many were worried about when this 2020-21 campaign began amid so much virus turmoil – on Thursday night when they host No.12 Martinsville in a battle of mirror teams. It promises to be a race between programs with a lot of offensive horsepower.

Martinsville (16-4 after Tuesday’s 74-71 shootout road win over No.5 Franklin that determined the Mid-State Conference title) ranks eighth in the state in scoring at 66.2 points per game, with three scorers in double figures and a fourth not far from that level. BNL (18-2) is not far behind at 62.6, although the Stars allow 9 fewer points per game, and has its own formidable weapons.

“They mirror us in a lot of ways,” BNL coach Jeff Allen said. “They’re very athletic, physical, they like to push the pace. We’ll have to execute, value possessions, be able to sustain runs. They put up big numbers, so we’ll have to counter.

“It’s a great game to prep us for the postseason, getting ready for tournament play. It will be a high-level basketball game, they’re a really good team having a great year.”

All three are explosive. Walker has a career-high 33 twice this season (going over 1,000 career points when she got that number against Perry Meridian last week), Wolfe had 33 against Bloomington South, and Traylor has been over 20 four times.

“They all like to drive the gaps and kick it out,” Allen said. “They’re proficient from the 3-point line, but they like to get to the rim. We’ll have to help each other and close out on shooters.

“It’s a difficult thing to ask the kids to take the drive away, and take the 3-pointer away. We’re hard to defend from that standpoint, too. So it’s a challenge for both teams. We’ll try to transition, and they will, too. It should be an up-and-down game.”

“Both teams are very comparable,” said Dorsett, who served as JV coach for two years before moving one seat over. “I think it will be a good game. Hopefully, if shots are falling, we can compete.”

Chloe McKnight paces the Stars in scoring at 14.8, followed by freshman Chloe Spreen (14.3) and Irye Gomez (12.0). The Stars have made 156 treys this season (with McKnight and Gomez shooting 40 percent from that range).

BNL has won four straight, and momentum is a key factor for the sectional next week at New Albany.

“You can always play well and lose to a really good team,” Allen said. “Of course, I want to win and so do my kids. We want to go into the tournament feeling like we’re playing well. It definitely puts an emphasis on this game. If we compete like I think we can, we’ll cause problems for them as well.”

BNL and Martinsville last battled in the first round of the 2017 regional at BNL. The Stars won that one 53-36 as Jorie Allen scored 25 points and grabbed 15 rebounds.