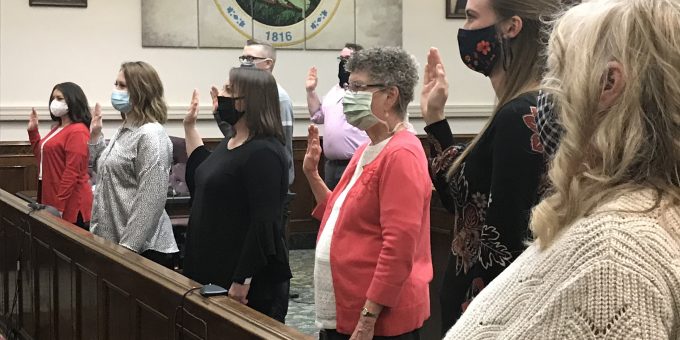 The volunteers put in approximately 30 hours of initial training. CASA volunteers will work a total of about eight to fifteen hours a month on each case.

Volunteers will meet with all parties involved in each child’s case and will then report their findings back to the court.

The following volunteers were sworn in on Thursday:

“CASA is so important to my position in my role. Without a CASA on the case the child is not adequately heard. It is extremely important that we hear the case from the child’s perspective in order to find what is in the best interest of the child,” said Juvenile Referee Anah Hewetson Gouty.

Richard Kosmala now serves as the CASA director for Lawrence County. He says there are approximately 225 cases in Lawrence County this year where CASA volunteers were needed.

“There is not a CASA volunteer on every case. There is a waiting list of children who are in foster care who need someone to step up and be their voice,” said Richard Kosmala, attorney for the Lawrence County CASA program. “With the number of volunteers we have today, we can represent an additional 20 to 30 children to make sure their best interest is protected in these court hearings.”

There are currently more than 50 CASA volunteers in Lawrence County.

“Director Richard Kosmala has grown the program in an amazing way and in a short time. Our goal is to have a CASA on every case and we are not doing that at this time. Until we reach that goal we will press forward trying to get one for each case,” added Gouty.

Nationally there are more than 93,300 volunteers nationwide who help be the voice of children who have experienced abuse or neglect.

There are approximately 80 cases involving children still on hold in Lawrence County.

The program recently received a $427,458 grant from the Victims of Crimes Act federal funding program which is administered by the Indiana Criminal Justice Institute.