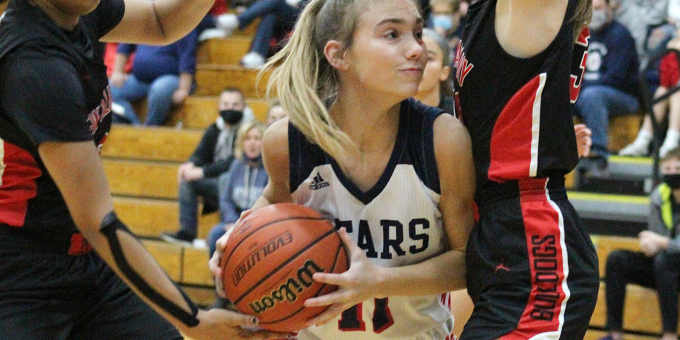 BEDFORD – For the past six seasons, the Bedford North Lawrence rivalry with Jeffersonville has been Indiana’s hottest. Epic battles. Last-second climaxes. Each finding extreme satisfaction inflicting pain on the other.

The proud programs have shared the last three Hoosier Hills Conference crowns, and neither has embraced the generosity of dividing the prize with neighbors. While that streak is in jeopardy as the Red Devils are struggling through the impact of an early-season virus shutdown, the No.7 Stars will visit Johnson Arena on Tuesday night with a singular mission.

Revenge. BNL, chasing its first outright league title since 2015, will have no sympathy for the Devils, with last year’s memorable meltdown still fresh on the minds of those who suffered through it.

In case anyone has forgotten, and nobody in the BNL locker room has, Jeffersonville stunned BNL last season, rallying from an 18-point deficit in the second half for a 56-53 triumph. Those Devils were on their way to a great season, until star Nan Garcia suffered an ACL knee injury and her team limped home without her.

These Devils don’t resemble their predecessors at all. In fact, no one knows who they look like. With so many changes – from a new head coach to roster losses because of virus quarantines – Jeffersonville (1-5) has few familiar faces. But the name on the jersey still gets BNL’s complete focus and begrudging respect.

“It looks like they’re struggling right now, but with all the COVID restrictions you hardly ever know if anyone has their full roster,” BNL coach Jeff Allen said. “Jeffersonville is notoriously a tough place to play. They would probably say the same thing about coming to Bedford.”

Here is what is known. Missy Voyles, who enjoyed tremendous success during her 16 years at North Harrison, took over the team after seven-year veteran Mike Warren stepped down at the conclusion of last season. Voyles guided the Lady Cats to five sectional titles, two regionals and two semistate titles during her two stints with that program.

The Devils started with a 69-50 win over Austin, but they’ve stumbled since. The entire program was paused from Nov. 12-20 with players in quarantine, resulting in the postponement of four games. They lost their league opener at Madison (53-34) and suffered a 62-57 loss at Trinity Lutheran on Saturday.

Voyles has been searching for the right combination among a young roster. None of the Devils are averaging in double figures, in part because of the shuffling of lineups as the virus protocols force absences. Senior Aija Estes (8.7), sophomore Sophia Reese (8.0) and senior Bailey Gibson (8.0) will be the main options.

The Stars are cruising at full speed, led by freshman Chloe Spreen (15.0 points per game) plus seniors Chloe McKnight (13.6) and Irye Gomez (11.9).

Spreen is coming off her best performance, 21 points and 11 rebounds during the 73-34 win over New Albany on Saturday. As she adjusts to an unfamiliar role of being the inside scoring threat for a lineup of guards, she’s getting more comfortable with the physicality of the 4A game.

“I’m definitely not used to it yet,” Spreen said. “Playing inside is a whole new position for me. But it will only make me better. I just have to play through it.”

BNL’s objective will be cutting down turnovers and winning the rebounding battles. The Stars had a season-high 17 miscues in the win over New Albany, in fact they’ve had only one game in single digits, but they won the boards by a 35-18 margin. They’ve been outrebounded only once, and it’s no coincidence that was the lone loss.

“For us, it will be taking care of the basketball and rebounding,” Allen said. “If we do those two things, we’ll be in good position.”

“Not turn the ball over as much and be smarter with it,” Gomez said. “Execution will be key. They’re still athletic and we have to rebound well.”

Turnovers turned the outcome last season. BNL was blasting the Devils 37-19 early in the third quarter when the Devils switched tactics to a full-court attack. The Stars wilted from that pressure. Jeffersonville went on a 23-3 run, then came back from a 53-51 deficit in the final two minutes. Garcia and Kelsie James scored 12 points each to lead the rally.

Last meeting: Last year at BNL, the Red Devils rallied from an 18-point deficit in the second half to stun the Stars 56-53 and end a six-game losing streak in the series. Nan Garcia and Kelsie James had 12 points each for the Red Devils. Madison Webb had 19 points for BNL.