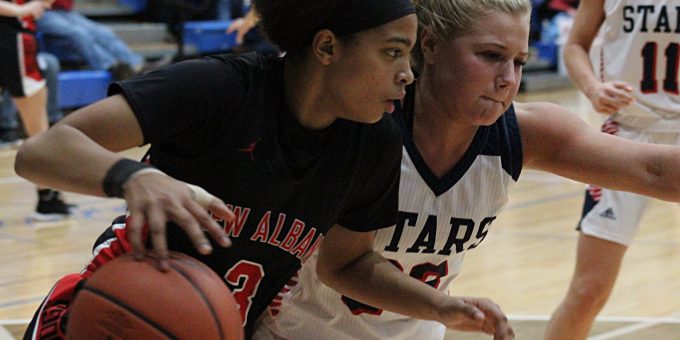 BEDFORD – First-year New Albany coach Shelby Gliebe, immersing herself into film study and live-stream viewing during her crash-course introduction to the Hoosier Hills Conference, watched this fast-paced, press-and-run team in action and thought “That’s how I want to play.”

She was tuned in to Bedford North Lawrence.

Imitation is the sincerest form of flattery, and the Bulldogs will get a live, up-close look at the current gold standard of the league when they invade BNL Fieldhouse for a Saturday matinee.

Gliebe, a former star at South Central, was named to succeed Tammy Geron after only one season at Clarksville, and she initiated program change. She wanted the Bulldogs to pick up the pace, to press and play fast with a lineup full of guards. Sound familiar?

“I was watching film, watching the BNL game against Jennings, and that’s how I want to play,” Gliebe said. “If we can eventually build a system, that’s literally what I want to do.

“We want to play fast. We’re still trying to get used to that. In the past, they’ve always had someone big on the inside, and we don’t have that. So we want to move the ball more. We’d like to get up in people and press a little more. We haven’t quite made that transition just yet.”

Change can be a slow, difficult process, and New Albany (2-5) has struggled through the system shift. The Bulldogs opened with an 82-34 win over Evansville Bosse and ended a three-game skid with an 81-65 conquest of Corydon.

But in the five losses, including a 53-51 setback to North Harrison on Thursday night, New Albany has averaged only 40.7 points per game.

“They’ve picked up on it,” Gliebe said. “They’re just not used to playing like that. They’re used to walking the ball up the floor. It’s a program-wide thing we’re trying to adjust. We will eventually get there.”

Senior forward Layne Burke is the scoring leader at 12.3, while Vanessa Burns has contributed 10 points per game off the bench. Junior guard Taylor Treat had 24 points against North Harrison.

If New Albany wants to drag race with the Stars, better buckle the chin strap tight. That plays to BNL’s strength.

“The big thing is seeing the ball go in the basket,” BNL coach Jeff Allen said., “It seems like they’ve struggled the last couple of games to see that. When the ball goes in the basket, it’s just a much easier game. We have to shoot the ball better.”

BNL has dominated the Bulldogs of late, winning the last three by an average of 33 points. That includes a 72-27 demolition in the sectional semifinal last season. McKnight paced that brutal beatdown with 21 points while Gomez totaled 11.

Last meeting: The Stars swept the Bulldogs last season, winning 65-36 in the regular-season clash at New Albany and 72-27 in the sectional semifinal at Jennings County.

Game notes: BNL has won four straight in the series, the last three by an average of 33 points per game. New Albany first-year coach Shelby Gliebe was a star player at South Central, where she played for her uncle Randall Schoen.