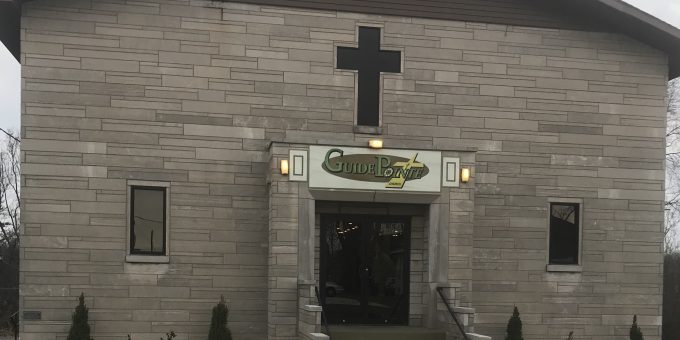 (BEDFORD) – On Friday night, Guide Pointe Church celebrated and reflected on the 100 years that the church has organized and continued on its mission to the community.

The evening was filled with music, exhortation, and preaching with Bedford Mayor Sam Craig, church leaders from Indiana, and Dr. David K. Bernard, Superintendent of United Pentecostal International delivering a message of hope titled “God Is Able” to the congregation.

Several photos, old baptismal records, and other church history was located at the front of the church for many to look back and see how far the church has come.

A short video took those attending back from the 1920s to the present during the service. The music took the church through certain decades with the old classic hymns of “I’d Rather Have Jesus” to some modern renditions with some funk-style music played in the mix.

The church has only had seven pastors over the last 100 years.

In 2002, JC Playhouse was a daycare that opened and is operating at full capacity.

In 2005, JC Christian Academy was opened to offer K-12 education to children.

“100 years is longer than a car payment, mortgage, and even a marriage,” said Pastor Chris Perry during his opening comments on Friday night. ” Tonight, it is not about a person, building, not even about an idea, but it is something older, and that is the foundation of Jesus Christ,” said Pastor Perry.

Since the church began it has moved from the original location at 709 14th Street (Bedford Street Department garage) to 527 15th Street.

Bedford Mayor Sam Craig came to congratulate the church on its long history in Bedford and spoke about the many things they have accomplished from starting a daycare and a christian school.

“100 years is a long-time for any organization; some have come and went and a church is no exception,” said Pastor Chris Perry in an interview Thursday about the upcoming celebration. “But we are thankful for the constant stability the church has provided and endured through the times since its beginning in 1920,” Perry added.

“It is a wonderful time to honor our past, and celebrate our future,” said Pastor Perry.

The History of Guide Pointe Church

During the 1920’s America was prospering; many were buying cars, appliances, and living the high life. American’s were drunk on prosperity and materialism. But not everyone was drinking bootleg liqueur and dancing the Charleston.

Since the early twentieth century, Pentecostalism and the rediscovery of receiving the spirit of God with the evidence of new tongues were also sweeping across the nation.

By 1921, Bishop G. T Haywood was at the forefront of this movement in Indianapolis, Indiana. In the spring of that year, local man Mr. Henry Lewis begin to be hungry for this experience to be brought to Lawrence County and Bedford. He contacted his brother, Willard Lewis, a minister in the northern part of the state who had already received this experience, to come and hold services in Bedford. Unbeknownst to the Lewis family, Bishop G.T. Haywood and his assistant Oscar “Sin- killing” Sanders had their eyes on Bedford too.

Both Lewis and Sanders got on the same train, on the same day, at the same time and headed for Bedford. During the ride, they would meet. In conversation, each was curious to the reason that the other was going to Bedford. To their amazement, it was soon discovered that both were coming to Bedford for the same purpose. God was truly orchestrating His will to bring a revival to Bedford. They soon rented the small African-American church on 14th Street for one month. There began the work of God that would last one hundred years in the city of Bedford.

Revival fell and the salvation hungry people began to repent, and be baptized in the wonderful name of Jesus. They were also filled with the glorious gift of the Holy Spirit, with the evidence of speaking in other tongues, just like the Bible had spoken of.

When the month’s rent was up, the congregation wouldn’t let the Pentecostals rent any more, because they were afraid that all of their people would be converted, and they wouldn’t have any members left.

In the early part of 1922, two important things happened.  Rev. Alvey came to be the first pastor of the church and money was put together to buy the three-room dwelling house that was just a block away at 709 14th Street, which sat on land that had been previously used as the city landfill. The men of the church worked and tore out the petitions and made pews from lumber that was donated to the church.

When the Lord started working, so did the adversary. Someone didn’t like this Pentecostal movement. One night, there was a stick of dynamite set under the eaves of the roof, but God stood by His people and the dynamite didn’t go off. Unfortunately, the church did catch fire, and was partially destroyed.

By December 15, 1924, the church received a building permit for an estimated cost of $1,500 to construct their new house of worship.

In the middle of 1926, Rev. Brafford became the new pastor of the church and was pastor until 1929.

On April 21, 1929, Rev. James Davis became the third pastor. The church continued to grow and prosper and on February 16, 1937, Bro. Davis resigned after almost eight years of service in Bedford.

On March 21, 1937, Bishop J.L. Sipes was elected the fourth pastor. Until he could move from Shelbyville, the Assistant Pastor Hebert Starr conducted the weeknight services in his absence.

During the Depression, money was scarce, but people still longed for entertainment. The word got around that a person could go down to the Pentecostal church and see quite a show for free. On hot nights, they would leave the windows of the church open. Many times, there were as many people outside listening and watching through the open windows as were inside. While some came for entertainment, many of those found themselves drawn to the overwhelming power of God that was present. It wasn’t long before they too were Pentecostal.

The Starr family was one of those families. Hebert and Eleanor had come just for the show, but one night while Bro. Patton was preaching, Herbert ran up the aisle to the alter. Eleanor grabbed his coat and tried to stop him. But his conviction was so strong that he broke free and found a salvation that would last the rest of his life.

By 1938, the Hebert Starr family had to move to Michigan in search of work. He would become the founder of a church in Lansing and help many others in the state of Michigan. His son, William, who had received this same spiritual experience in Bedford, would later pastor churches in Michigan and rise to the District Superintendent of Michigan for the UPCI.

When Bishop Sipes first came to Bedford, in his efforts to raise funds to pay off the indebtedness of the church, he took a job becoming a bi-vocational pastor. For a time the Sipes family lived in the upstairs apartment. Old-timer’s said that when you needed to use the restroom you climbed the stairs to their apartment.

On nights when Bishop Sipes knew there would be an extra-large crowd, he would go downstairs and put extra props under the floor so that it wouldn’t fall through when the Spirit of God started moving and the people started moving with it.

Once the church was paid for, the congregation with the leadership of Bishop Sipes purchased land on 15th Street and began to make preparations for a new facility. By 1952, the building was complete and on that memorable Sunday the congregation marched from 709 14th Street to 527 15th Street singing “Onward Christian Soldiers”.

Under the direction of Bishop Sipes in the 1950s, Harry Holt would leave, taking his family and founding the Pentecostal church in Mitchell, Indiana. Revival continued in Bedford and the building filled with people. The same experience that had come to Bedford some 35 years earlier was still alive and well. During one great revival in 1955 there were over 45 conversions in a single revival.

At the end of 1961, Bishop J.L. Sipes left this earth for his eternal reward. He had labored diligently and had done all he could to bring strength, stability, and give the church a future.

In 1962, Rev. Glenn Craig became the fifth pastor. During Rev. Craig’s tenure, the church continued to grow. Many revivals took place and people were added to the congregation. It was during this time that an addition was added to the back of the church to help alleviate the overcrowding.

A bus ministry was started. Harry Padgett, Leroy Davis, and Cledous May were instrumental in driving and working on the buses to maintain them. The Sunday school filled with many children riding the bus to the church on Sunday mornings.

Several adjacent properties were purchased to expand the parking lot.

By the 1960s, there were many members of the church spannee multiple generations. Many ministers felt the calling to start churches in the surrounding community. A few of those included Harrodsburg, Springville, and Bedford, Indiana itself. After fifty years the Pentecostalism that had started in Bedford at the city landfill had spread throughout Lawrence, Monroe, and surrounding Counties.

In December of 1974, Evangelist Elliott Perry, along with his wife Betty and son Chris, came to hold a revival. While he was here, he began to feel an intense burden for the city of Bedford and its people. At the same time Pastor Craig was feeling a calling to Florida.

In the spring of 1975, Rev. Elliott Perry became the sixth pastor. For the next 24 years, Elliott Perry labored fervently to continue the work that had begun long ago. Many of the original members were still alive and a part of the church at that time. During his tenure of 24 years, over 1,000 people were baptized and the church was extensively remolded on two different occasions. For 14 of those 24 years, he served as a presbyter of the Indiana District of the UPCI.

In 1998, Pastor Elliott Perry decided to retire from pastoral ministry and a business meeting was called. The church unanimously voted for his son Chris to become the seventh pastor. Pastor Chris Perry has a great appreciation for the history of this storied assembly. He continues to pay homage to the past while always reaching forth to the future of this new century.

In 2002, the congregation decided to reach out to the community through opening the daycare ministry, JC’s Playhouse. JC’s Playhouse has touched many families and young people by providing a safe enriched environment for children to learn, play, and grow in.

In 2005, the congregation decided to once again reach out and to open JC’s Christian Academy for the community.

Because of these two efforts, many members of the community have been reintroduced to what is now called Guide Pointe Church. From their humble roots from a borrowed small building, to the city landfill, and now a multi-building campus, they have seen the supernatural at work in every phase. They look to the future knowing that God is always in control. He has sustained His work in Bedford, Indiana, for 100 years.

All in all, it has been one continuous growth, from the very beginning to the present time. All seven pastors have played their part in bringing the church to its present state and reaching this monumental milestone of 100 years.