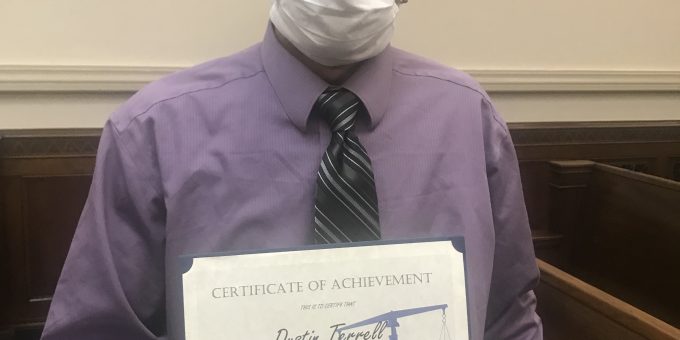 (BEDFORD) – The courtroom is not normally a place where happy occasions occur.

However, Thursday morning everyone was happy in the courtroom after six individuals reached their goals and major milestones in their lives.

Thanks to their perseverance, determination, and a relentless attitude they graduated adult drug court.

Their stories began battling drug addiction and a lifestyle filled with lies, dishonestly, theft, and family relationships strained. All six have found jobs, are seeking to further their education, have won back the custody of their children, and some now own homes.

The path to their happiness was not easy but the legal system and their families did not give up on them. Most of all they never gave up on themselves.

Mariah Dixon, Dustin Terrell, Amanda Mathias, Averi Hill Mathias, Crystal Walker, and one other individual who asked not to be named were successful in completing the program.

Judge William Sleva said today was a bittersweet moment for him. Sleva presides over the program. But today would be the last graduation he presides over as Sleva is retiring.

The problem-solving court started in 2004 with approximately 72 individuals graduating from the program. Sleva has dealt with seeing addicts appear in his court for more than 31 years.

During this time 72 people have found a new beginning in their lives, a life free of drugs, crushing financial burdens, and struggles that always accompany substance abuse and addiction, Judge Sleva said.

These indivduals have reclaimed their lives.

“This job, this service, especially in the criminal justice arena, does not have many opportunities for joy and happiness,” said Judge Sleva added. “Many things a judge deals with are tragic, heartbreaking, unbelievable, and at times horrific, but with programs and watching all of their and other participants achieve wasn’t at one time all of the thought was impossible to achieve has been fantastic.”

Many find help after entering into the legal system. They think things will never catch up with them until they either find themselves in the hospital, legal system, and sometimes not even given a chance of a new life before death finds them first.

Being in drug court is not an easy process.

“You start out on house arrest, you must not hang around old friends, you need to move on to healthy things; it is a process that is really worth it in the end,” said Dixon.

Those completing the program have the support of probation officers, counselors, and many others who oversee the program. All thanked Judge Sleva for believing in them throughout their legal process.

“This whole experience has been a blessing to me. I encourage those to seek help because in the end it is worth it,” said Dustin Terrell.

The smiles on these graduate’s faces today told those attending that lives can be reclaimed – following a lifestyle of drugs. Now is the time to seek out help.