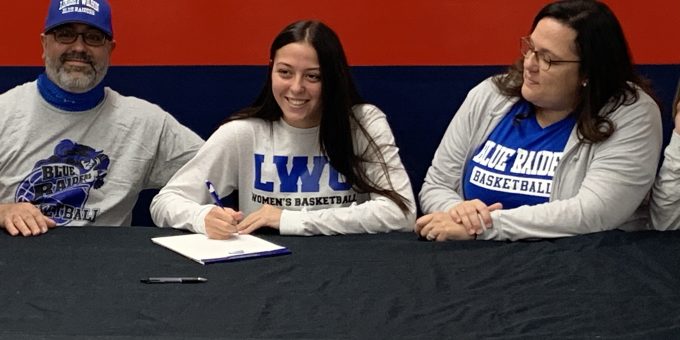 During her recruiting visit to Lindsey Wilson, team members took time to introduce themselves and talk with the Bedford North Lawrence senior. In her visits to five other colleges, no others had done that.

Guess where Gomez is headed?

Gomez autographed the bottom line with the Blue Raiders on Saturday afternoon, becoming the first member of BNL’s program to sign with veteran coach John Wethington in his 32 years with the Lindsey Wilson program.

Gomez averaged 12.5 points for the Stars last season, helping BNL go 21-6 and reach the Class 4A semistate. She’s a versatile scorer with outside range and driving toughness.

“She will bring a lot of energy,” said Wethington, who ranks third among active NAIA coaches with 634 career wins. “That’s one of the first things. She’s a scorer. There’s a lot of things I can teach, but being able to shoot it and score like that is not one. I can make you better, but I can’t make you a shooter.”

Gomez settled on Lindsey Wilson (located in Columbia, Kentucky) after seeing the similarities to the BNL program.

”I fell in love with the campus, with the environment,” Gomez said. “They play fast, and I’m already used to that. And when the players came up to introduce themselves, I thought that was cool.”

BNL also had a Lindsey Wilson connection as assistant coach Chase Spreen played there and helped set up the contact with Wethington and his staff.

“The program she comes from, they know what winning is all about,” Wethington said. “I find kids from winning programs. Their coaching staff is like mine, very demanding, so it’s the fit we really like.

“I find good players. Longevity is finding good talent, and good people. That’s what she is.”

Lindsey Wilson went 26-6 (including 13-3 in the Mid-Southern Conference). The Blue Raiders have won 20-plus game for six straight years and have posted 13 consecutive winning records.