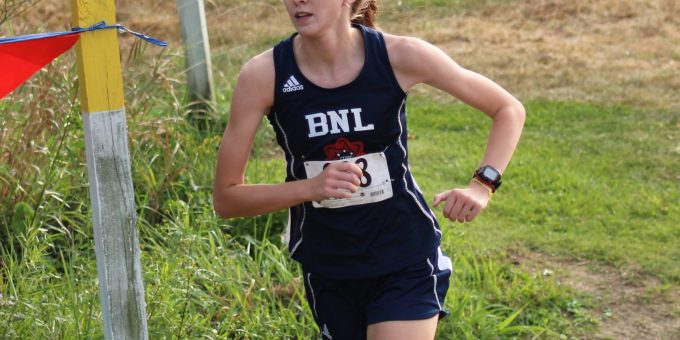 BEDFORD – Autumn Spence’s earliest memory of cross country takes place in the front seat of a stroller, cruising around as her mother Amy pushed her 5-year old along while running and coaching her high school team in Oregon.

Those were the days.

The final memory of her high school career will take place on Saturday when Spence competes in the IHSAA state finals. No stroller, just a fast-paced 5K jaunt around the LaVern Gibson championship course in Terre Haute as she chases glory in her farewell event.

Spence, the first Bedford North Lawrence runner to compete in the state meet since 2010, will join an elite field of 208 athletes (24 teams and 40 individuals from the four semistates) in the state championship charge.

She got there by the narrowest of margins, claiming the last individual spot in the Brown County semistate with a personal-record time of 19:39.2. Most athletes, especially a senior, would be content with that accomplishment and settle back for a stroller ride into the sunset. Spence is not going to pushed along.

“I’m happy to be there, but since I’m here, I can probably go to the next level,” Spence said. “That doesn’t kick in until the race. I’m shooting for my best race yet.”

Duplicating that time, when comparing it against the state results from last season, would place Spence in the upper third of the finishers. Does she have anything left to burn for that push? Her training was geared toward the semistate, although she thinks she has speed in the reserve tank.

“It was not a sure thing to get there,” BNL coach Jill Vance said. “I thought she had a good chance, but it wasn’t absolute. So we designed her training aiming for a peak at the semistate. That was the all-or-nothing race. The focus this week is holding on to that peak.

“It’s her last race, this is the final step and it’s her senior year. So her focus is going out on the best possible note. She can gain a lot of satisfaction on her accomplishment, knowing she ran the absolute best she had in her.”

Spence believes she has a final gear. She enjoys the course, which is similar in style to the BNL venue with its rolling hills and toughness. The Gibson layout features wider running lanes, which could give her more passing chances once she settles into her race pace.

“This is my favorite course to race,” said Spencer, who finished 70th (out of 202) in the season-opening Valley Cross Kickoff race on the course back in August. “It does have rolling hills, so you can continuously pass people. And it’s really nice with only one lap, with the amazing 800-yard straightaway finish. I thrive on that because I love going fast at the finish.”

That’s how Spence got here, with a tremendous kick to pass four people in the final stretch at the semistate.

No matter the conclusion, Spence is thrilled to have the opportunity. She will walk away with a profound sense of achievement.

Action will get under way at 11:30 a.m. Following the conclusion of the girls race and the awards ceremony, the boys race is set for 3 p.m.