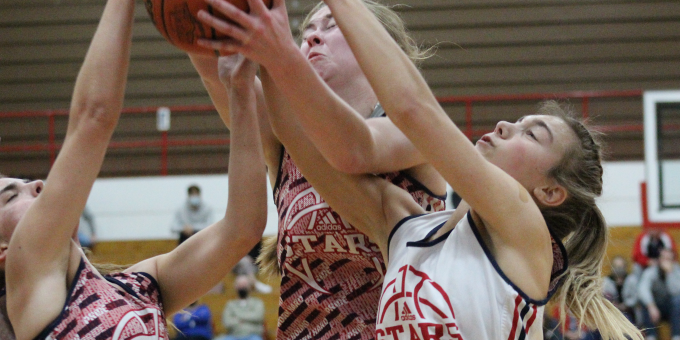 BEDFORD – Welcome to the new age. This isn’t your father’s basketball style, with designated positions based on height and skills. This is the new wave, next generation, a revolution.

And if the intrasquad scrimmage debut is any indication, Bedford North Lawrence’s offense will be radioactive.

The Stars unveiled their adjusted attack on Tuesday night, unleashing what could undoubtedly be the best 6-foot-and-under team in the state. Alas, classes are broken down by school enrollment, not roster heights, but that won’t stop BNL from being one of the more dangerous teams in Hoosierland.

Lacking a true post player for the first time in a decade, BNL will play five guards, press like demons (even after misses) and fire from the perimeter without much conscious. They could be a dream to watch, a nightmare to play against. It’s enough to make the old-school systems blow.

Buckle up for a wild winter.

“With this group, that’s one of our assets,” BNL coach Jeff Allen said. “We shoot the ball well from the 3-line. We can create lot of spacing, because they all handle the ball well and they can drive. So it makes it hard to guard that scenario. You’re either driving to the rim or creating threes for a teammate.”

Case in point: BNL hit 16 treys in three quarters of action. At one point in the second quarter, six straight baskets were from long range. And the Stars are just breaking in, just warming up for the 2020-21 campaign.

“We shot the ball pretty well,” Allen said. “We have the ability to have a lot of different weapons on the floor. We had a pretty good offensive display.”

The varsity was divided evenly for the first two quarters, with the Red squad prevailing 34-28. Irye Gomez, one of six seniors, was the scoring leader with 16 points, including four bombs in the second quarter.

Chloe Spreen, the freshman with the handful of Div. I offers and the excellent reputation that precedes her, paced the White with 10 points while Chloe McKnight added 8.

In the final quarter, the varsity rushed to a 23-6 win over the junior varsity as Haley Deckard paced a balanced blitz with 7 points.

With strength comes an obvious weakness, one that will be spotlighted all season. BNL will have to work extra-hard to rebound and defend the post against taller opponents.

“If we can rebound and guard the post, we’re going to be OK,” Allen said. “We have to clean up some things defensively, clean some execution things up.

“There’s no traditional post player like we grew up with. There’s something to be said for having a post player, and we’ve had one for several years. This year we’re blessed with an abundance of perimeter players. We’ll make a few adjustments. We’ll play fast, create offense with our defense. We feel we can play fairly deep and keep pressure on people.

“We have some kids that are really athletic. I’m encouraged by what I saw. This group really likes each other, they’re going to play hard.”

Gomez and her teammates have already embraced the “positionless” style, which grants green-light freedom to launch or dribble-drive to penetrate the interior. Possessions won’t last long. Layups or treys, without much middle ground.

“It’s going to be really fun,” Gomez said. “We have a lot of people that can do different things. We’re very deep. No matter who’s out there, we’ll be fine.

“What makes it fun is we all know we can score, but we’re not selfish with it. We know each other, and we’re trying to get it to each other.”

BNL will continue its preseason work on Saturday, hosting Heritage Christian in the IHSAA-sanctioned scrimmage at 2 p.m.

Tickets will not be sold at the door. Seating for all home games this season (unless the virus epidemic eases) will be capped at 1,000, and all tickets must be purchased in advance through the BNL athletic office.