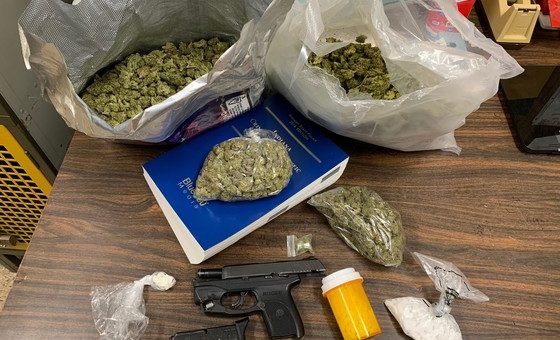 (NEWTON CO.) – On Friday morning, a trooper from the Lowell post stopped a 2020 Nissan Altima for several traffic violations on U.S. 41 in Newton County.

As the officer spoke to the male driver, he immediately detected the odor of raw marijuana coming from inside the vehicle.

A police K9 also alerted to the presence of a controlled substance being in the vehicle.

A search of the vehicle was conducted which resulted in more than two pounds of marijuana being located as well as a large quantity of Hydrocodone pills and a baggie of a white substance that field tested positive for cocaine.

A loaded 9mm Luger handgun was also located and submitted as evidence.

The driver, identified as 28-year-old Phashun Lavonne Davis, from Chicago, IL, was arrested without incident and transported to the Newton County Jail.

A female passenger was released from the scene.

The vehicle was impounded by Village Motors Towing.