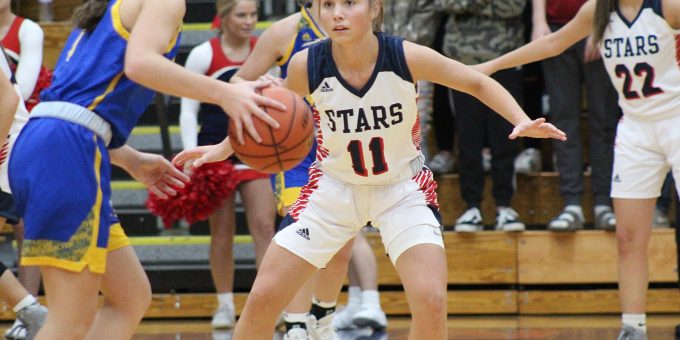 BEDFORD – The acclaimed Serenity Prayer should probably be framed and mounted on the wall of every basketball coach’s office this winter. “God, grant me the serenity to accept the things I cannot change, courage to change the things I can, and wisdom to know the difference.”

Bedford North Lawrence coach Jeff Allen could worry about a lot of issues this winter, most notably the virus threat that is out of his control. What will happen? Will the 2020-21 season take place? Worrying doesn’t solve problems.

Here’s what he does know: official practice sessions are under way, and this version of the Stars could be dynamic, a serious threat to make another deep tournament run. He’ll worry about post defense and rebounding. That is what he can control. The rest will take care of itself.

Allen welcomed a six-player senior class and a 23-person roster to Opening Day in the auxiliary gymnasium on Monday afternoon. That’s where serenity can be found – on the court, taking control of a talented, deep, motivated team. BNL’s opponents might be praying for something totally different.

BNL went 21-6 last season, falling to eventual state champion Lawrence North in the Class 4A semistate. The Stars lost two starters, including including all-HHC center Madison Webb. They will return scoring leaders Chloe McKnight (14.1) and Irye Gomez (12.5) at the head of the senior class, in addition to sophomore Karsyn Norman (8.1), who got shoved into the spotlight and thrived as a raw rookie.

That’s a strong nucleus. Then add freshman Chloe Spreen, already being targeted by multiple Division I programs and mentioned among the elite players in the nation. That’s why Allen was smiling through most of the first practice.

“We have a lot of new people, and we already have good chemistry,” Gomez said. “And we haven’t even played our first game.”

BNL’s first official game is scheduled for Nov. 6 against Mooresville. The Stars have also set an intrasquad scrimmage for Oct. 27 and the IHSAA-sanctioned scrimmage with Heritage Christian on Oct. 31. That’s if everything continues as planned. The word “if” has never been bigger.

“First of all, we’re excited that we’re having a season,” Allen said. ”We’ve all been in limbo for a while. We got to practice a little this summer, but it hasn’t been the same since March (when the virus forced shutdowns). We’re excited to be here.

“The stuff that’s out of my control worries all of us. What happens if we get shut down again? We have a big senior class and I really want to see them have a great year.”

BNL senses the urgency, especially after watching the boys basketball tournament get wiped away. So far, the fall sports campaigns have gone off with only minor glitches and some scattered cancellations. Fingers are being crossed.

“We don’t really know if our season is going to happen,” Gomez said. “So every day we come into practice hoping we get to play.”

“We don’t know what will be our last game, so we play every day that way,” McKnight said. “We’re worried about not being able to play. It’s our senior year, our last go-round. We want to make it one game further.”

BNL will be chasing its usual goals – defending the Hoosier Hills Conference title, gunning for a 10th straight sectional crown – but the loss to Lawrence North in the Final 4 was a stinger.

“Every year we talk about wanting to compete for a sectional championship, and the conference, and this team will do that,” Allen saiid. “But they have goals beyond that.

“It’s the fact we’ve been close. We’ve had a lot of success, we’ve been to those championship levels. Trying to take that next step is a possibility with this bunch. It will take a lot of work, but that should be the motivation.”

BNL will lack size, but plans to make up for the shortcoming with overall team speed and an attack mentality.

“We have a large senior class (including Haley Deckard, Grace Kinser, Makena Moore and Jenna Louden), with some really good kids and talented athletes,” Allen said. “You mix that with some good young players, and it’s an exciting possibility we could be really good.

“On the floor, we’re small and athletic. We may struggle at times to guard the post and rebound, and that will be a focus for us. We’ll just expect our kids to work a lot harder. Post defense and rebounding is a lot of heart and desire, and I think our kids have that.”

BNL won’t grow in size over the next three weeks, but the Stars will grow. They’ve already started the countdown clock for the debut.

“It’ll be here sooner than we realize,” Allen said.