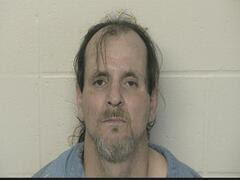 (SCOTT CO.) – A Scott County man was arrested Thursday after he attempted to evade an Indiana State Trooper on a motorcycle.

During that time, the trooper was trying to locate a fugitive wanted by the US Marshals and the FBI, who had been spotted earlier in the area.

The motorcycle operator’s clothing matched the description of the fugitive.

The driver was now riding the bike through a grassy field towards a wooded area.

The driver, later identified at 47-year-old Michael Weston, of Austin, was attempting to elude the trooper.

While speaking to the rider standing in the roadway, the trooper spotted the motorcycle near the wood line.

Other troopers arrived on the scene and entered the woods searching for Weston.

Weston was located lying face down on his stomach. It appeared he was attempting to conceal himself in thick brush a short distance from where officers entered the woods.

Further investigation revealed Weston’s driver’s license was suspended and the motorcycle was listed as stolen by the Indianapolis Metropolitan Police Department.

After making identification, officers confirmed that Michael Weston was not the fugitive authorities were initially trying to locate.

Weston was arrested on charges of resisting law enforcement with a vehicle, auto theft and driving while his driver’s license was suspended with a prior conviction.

He was incarcerated at the Scott County Jail without further incident.