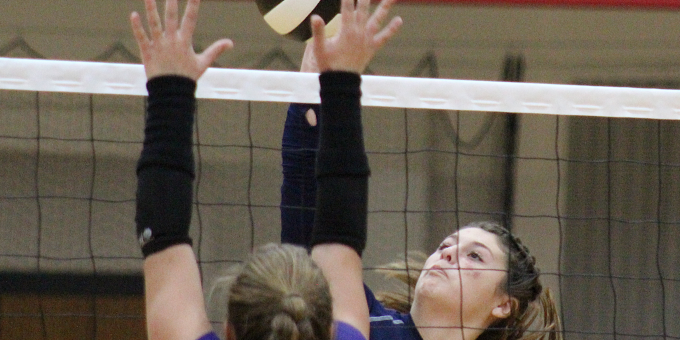 BEDFORD – The big Fish made a huge splash. And this prize got away from Bedford North Lawrence. Had ‘em on the hook, didn’t reel it in.

With 6-1 sophomore hitter Olivia Fish, who will be someone’s Div. I recruiting catch, casting and dominating at the net, Seymour swept to a 3-set victory over the Stars on Tuesday night in the home-court finale.

BNL (14-11, 3-4) had its moments and chances, most notably a commanding 17-9 lead in the pivotal second set. Get that one in the boat, and the tide shifts. But BNL’s passing game went adrift and victory went out to sea with it.

“We really struggled with passing,” BNL coach Gabrielle Arthur said. “Where we struggled, they excelled. Passing is the most important part of volleyball. When we struggle with that, we can’t get a set, can’t get a ball down.”

Every set followed the same script: Play even until a late surge changed momentum. In Set 1, BNL had erased a 9-3 deficit and pulled even at 13-13, but Fish exploded for four kills during a closing 8-0 burst.

The second was the defining moment. The Stars had a 19-12 lead, then imploded as Seymour finished with a 13-1 blast. Fish had three more kills in that span.

So why would Set 3 be different? Seymour stormed to an 8-3 lead, the Stars scrambled back to 15-15, and the Owls scored seven consecutive points.

“Those last points, we couldn’t find the momentum to finish,” Arthur said. “We’ve been a team to always finish at the end. We just couldn’t pull it out.”

Fish wasn’t Seymour’s only angle. Lauren Knieriem and Cali Cummings had 8 kills each while Paige Lawrence added 13 assists. Seymour coach Angie Lucas pointed to the key comeback in Set 2 as the deciding factor.

“It was the difference in the match,” she said. “We made a ton of errors at the beginning. When we started stopping the errors on our side, became a little more aggressive at the net, it really helped.

“That’s volleyball. It’s momentum and that’s the way it goes. I was glad to see us fight back.”

BNL will conclude the regular season at Class A No.3 Loogootee on Thursday.