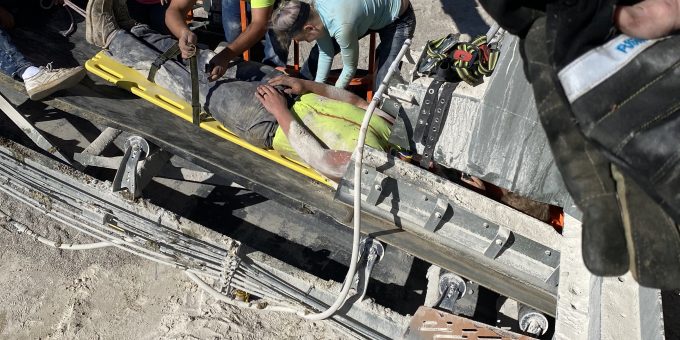 (SPRINGVILLE) – The safety of employees is a priority for US Aggregates, Springville Quarry location and the company wanted to get the local emergency personnel familiar with a new stone crusher the company is now using.

The company already has personnel trained in providing emergency care, but wanted to work along side local emergency personnel in treating and removing victims who may become trapped and injured.

“In the first scenario, an employee became trapped underneath the belt and an US Aggregate employees performed the rescue and had the victim ready for the department to get the victim down,” said Jessica Voorhies, Fire Chief of the Perry Township Volunteer Fire Department.

“In the second scenario, the fire department had to treat the victim, for bleeding, secure the spine and back, and then get the victim from underneath the belt, and then to the ground,” added Voorhies.

US Aggregates takes part in one live-action drill a year and involves the local fire department in the drill.

“We take a lot of pride in instilling safety into our employees,” said Joe Long from US Aggregates. “This type of work is dangerous and as our 20-year employees are starting to retire we have a whole different bunch of employees who are more detailed oriented. They take this training to heart, and are very active and involved in this. We conduct work permits and work plans, and take several steps before doing a job that is abnormal.”

“With the scenarios today, we took two hours of looking at the crushing machine, as well as looking at potential types of emergencies that may occur,” Long continued.

The two fire departments were chosen due to the close relationship the company has with the emergency personnel.

“During the day, our fire departments are short-staffed and may have to rely on mutual aid to be able to deal with these emergencies, and it is always good to work together,” said Chief Voorhies.

Following the drill, company employees and fire department personnel discussed the positives of the exercise and identified ways to do things more efficiently.

“We would like maybe sometime in the futures inviting the local community down and let them look over our facility here,” said Long.

Both Perry and Indian Creek VFDs said the training was very beneficial.