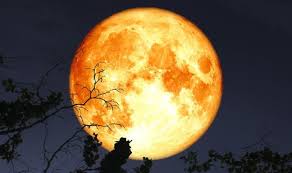 The term “harvest moon” refers to the full, bright Moon that occurs closest to the start of autumn.

For several evenings, the moonrise comes soon after sunset. This results in an abundance of bright moonlight early in the evening.

In the days before tractor lights, the lamp of the Harvest Moon helped farmers to gather their crops, despite the diminishing daylight hours. As the sun’s light faded in the west, the moon would soon rise in the east to illuminate the fields throughout the night.

It’s the location of the moon near the horizon that causes the Harvest Moon – or any full moon – to look big and orange in color.

One thing that sets the Harvest Moon apart from other full Moon names is that it’s not associated with a specific month. Instead, the Harvest Moon relates to the timing of the autumnal equinox (September 22, 2020), with the full Moon that occurs nearest to the equinox being the one to take on the name “Harvest Moon.”

This means that the Harvest Moon can occur in either September or October, depending on how the lunar cycle lines up with the Gregorian calendar.

The orange color of a moon near the horizon is a true physical effect. It stems from the fact that – when you look toward the horizon – you’re looking through a greater thickness of Earth’s atmosphere than when you gaze up and overhead.

The bigger-than-usual size of a moon seen near the horizon is something else entirely. It’s a trick that your eyes are playing – an illusion – called the Moon Illusion.