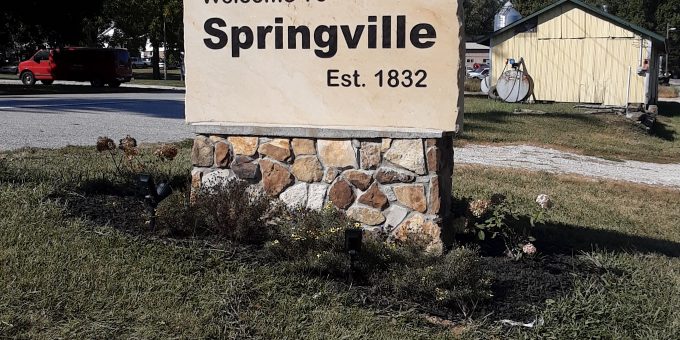 This event, held every fall, allows the community to get together and have a great time.

The town of Springville is 188 years old this year. The town has weathered hardships over the years.

Springville is known for their community spirit and patriotism. Over the years, there have been a lot of changes, but what has not changed is the determination to continue to make the community a better place to live.

National and local issues are discussed and solved over a cup of coffee and breakfast every morning at the Springville Grocery. Of course, the gentlemen that sit down and hash it all out, may not always agree. A few disagreements may have been broken up by Sherry Shelton, one of the owners of the Springville Grocery Store before a real fight breaks out – but in all good fun.

“They return the next morning and do it all over again,” said Shelton.

“This community has always shown us support, and its been nice to be a part of this small town,” said Max Shelton who after 12 years has recently sold the Springville Grocery. “The new owners will take over on Thursday.”

The town of Springville was settled along Spring Creek back in 1832, and has seen many businesses come and go throughout the years. A railroad ran through the center of the town and at one time there were three or four grocery stores.

Farming has always remained in Springville, and every spring and fall many farmers come to have their cattle sold at the Springville Feeder Auction.

The town has suffered some losses over the last few years, including their beloved gynasium which was the center of their festivals and community events.

The gym was destroyed by fire in 2016, and the community has rallied around getting a gym back open. Over the last couple of years, the restoration has been held up by permits and government oversight of the project.

However, there is expected to be some great news being released shortly on the gym restoration project.

The other big disappointment is the closing of the Springville School, but the community is working diligently in getting the school back through a charter school, just like Roy Thompson, Perry Township trustee who worked hard in getting a nice school built.

The former school sat next to where the old sandstone gym sits now.

Despite some of the challenges the community has faced, it has always worked for the common good of the community. This includes supporting its Boy Scout troop, local fire department, and the upkeep of their community park.

The Springville Park was a community effort to beautify the town.

Residents put money and hard work in constructing the park in 2004, which has a shelter house, playground equipment, sidewalk, benches to sit, and horseshoe pits.

Many have found that once you come into Springville you are no longer a stranger and are treated as if you have always been around.

“I moved down here almost twenty years ago and this community has been great to me,” said resident Brian Enochs.

A couple passing through last week stopped by to look things over.

“We have a family member who will be moving down here next week and just wanted to see what a beautiful place this is,” the family said.

The tractor show begins around 5:00 p.m. at the old gym, with food available to raise money for the upkeep of the Springville park.