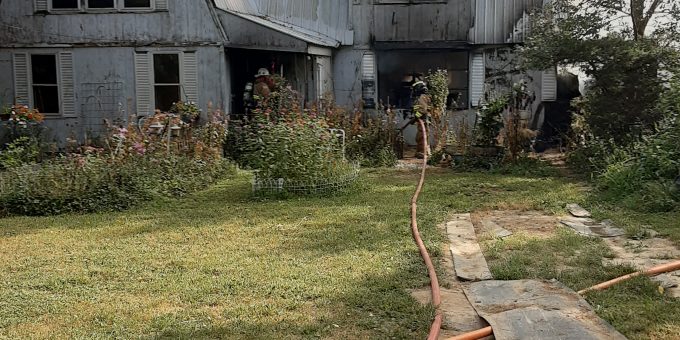 (BEDFORD) – A firefighter was treated at the scene during a house fire Monday afternoon that took several hours for firefighters to bring under control.

The two story home, owned by John and Deanna Moore, had sawdust and wood chip insulation in the home which complicated firefighting efforts.

“We believe the fire started in the work area of the residence. We had the fire knocked down at least three times during the course of the evening but the blaze kept flaring back up,” said Bobby Brown, Fire Chief Shawswick Volunteer Fire Department.

“The cause of the fire is still under investigation at this time. All the departments have done excellent job. The fire was just too hot of a fire for us when we made entry to the home on three ocassions,” said Brown.

Water supply for firefighters was limited with no fire hydrants nearby. 15 fire engines and 28 firefighters from the five fire departments were called out Monday afternoon.

A supply line from the county road had to be stretched more than 700 feet to a fire engine, due to a narrow driveway and no way to get other fire engines in to fight the fire.