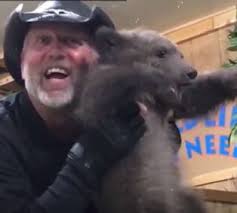 (CHARLESTOWN) — Police officers and zoo workers have started removing animals from Wildlife in Need’s property that faces a court order to surrender them following abuse allegations.

The Indiana attorney general’s office sued the center in February for allegedly abusing exotic animals, including incidents where the center’s owner punched a sloth in the face and repeatedly stomped on a tiger cub that had bitten him.

Under the court order, monkeys, birds, wolves, and bears are among the animals that will be removed and cared for by the zoological society. The Indianapolis Zoo will be in charge of coordinating where the animals go.

The center’s owner, Tim Stark, was ordered to stay at least one mile away from his property in Clark County, just northeast of Louisville, Kentucky, as the animals are moved.

Stark was stripped of his U.S. Department of Agriculture license in June after agency officials said he violated the Animal Welfare Act more than 100 times. Many of the animals at the center were left without adequate care, no food and water, according to court documents.

Stark argued that he had never hurt the animals and that moving them put their lives at risk.

The zoologicial society will have access to Wildlife in Need on Sunday, Tuesday and Thursday this week to retrieve the remaining animals covered by in the judge’s order.