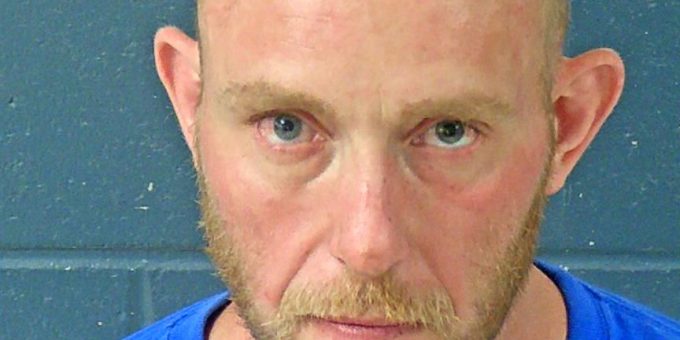 (MITCHELL) – A Shoals man was arrested Saturday night after being stopped for a traffic violation by a Mitchell Police officer.

According to a probable cause affidavit, a Mitchell Police officer stopped Chastain after the officer noticed his Jeep SUV had a cracked windshield and learned the driver had a suspended driver’s license.

The officer stopped the vehicle at State Road 37 adjacent to Old State Road 37. The vehicle continued to drive without yielding. After approximately five to six seconds the officer activated his emergency siren. At this time,
the vehicle began to yield to the shoulder of S.R. 37.

Before coming to a complete stop the officer noticed the passenger moving around in the seats.

Police say there were three people in the vehicle.

The driver told police he was taking his brother, while pointing to the front passenger, to Bloomington to live on the streets. The passenger then stated he was homeless.

The officer then asked the driver if he knew his license was suspended. The driver stated they weren’t. The officer then advised him that he had ran the plate to the vehicle, and it showed the registered owner Travis Chastain’s license was suspended. At this time, the front passenger stated it was his vehicle and said he was Travis Chastain, the registered owner.

While speaking to the driver, Trinton Chastain, officers learned Trenton’s driver’s license was suspended due to unpaid child support. It also showed Trenton to not be eligible to receive a license.

Police say all the occupants of the vehicle were extremely nervous.

K-9 Jack alerted to possible drugs in the vehicle.

Travis Chastain was arrested. Trenton Chastain was issued a citation for driving while his driver’s license was suspended.