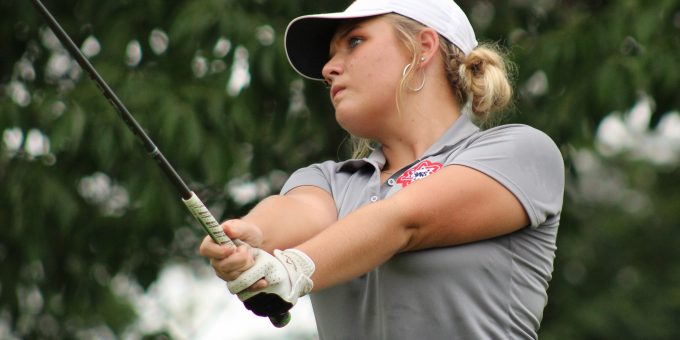 LEBANON – Playing short on a long golf course, No.18 Bedford North Lawrence suffered through a long day during the Hall of Fame Classic at the Trophy Club.

The Stars, minus senior Olivia Sanders, posted a team score of 406 And finished 19th in the 21-team field on Saturday afternoon. Sanders went home with an illness.

Addyson Bailey paced BNL with a 94 that included a birdie on the 16th hole and five pars (on a course no one on the squad had seen) on a layout that was stretched over 6,000 yards. Chloe McFaddin (five pars) carded 98, Ashley Chase (four pars) added 99, and Kennedy Blair completed the scoring with 115.

”We had never seen the course, and the big thing was the length,” BNL coach Aaron Sanders said. “That was very unusual for a tournament, and the course was soft. It was tough for everyone. Scores that I saw from other teams were pretty high.

“I was proud of our girls for hanging in there all day. We brought some of the bad stuff on ourselves and didn’t play well, but our attitude stayed pretty good and they fought it all day.

“This will make a better player and person in the end. It’s a six-hour round, and we weren’t used to that yardage. It’s a learning experience.”

BNL will return to Otis Park to host Seymour on Tuesday.