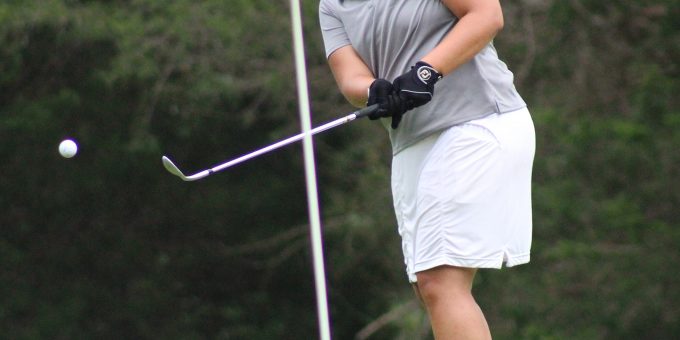 BEDFORD – Ashley Chase called it a “trick” shot, a low bullet from the rough that skipped off a cart path, bounded 25 yards and rolled on the 16th green to two-putt-par position.

Mean to? Maybe. Lucky? Perhaps a little. But after rough days of late, Chase was going to take it.

The scuffed-ball par on 16 was the last of five straight pars on the back nine as Chase carded a 4-over 39, leading No.18 Bedford North Lawrence to a 168-199 triumph over Martinsville on Thursday afternoon at Otis Park.

Chase spent some Wednesday practice time with coach Aaron Sanders, working on eliminating head movement in the swing. She was rock solid as she earned medalist honors

“Coach and I really worked on things,” Chase said. “Obviously I haven’t been doing very well. He helped me with my swing and I felt a lot more comfortable than I ever have been.

Chase started her par streak on 12, and her main key was hitting greens – no matter what bounce was necessary. She also enjoys the second side of Otis, where many good rounds have gone to die.

“I definitely like the back nine,” she said. “It’s always been my best. It’s just in my head, but I think it’s easier. And this was definitely a confidence booster for me.”

“She has struggled, but her scorecard was really clean, realty solid,” Sanders said. “We talked a lot about hitting smaller targets, She gets out there and swings just to hit a fairway, instead of really looking at precise targets. She understands what is going on, and it’s good to get her in the right direction.”

Her teammates were going the opposite way. Addyson Bailey carded a 42 with doubles bogeys on the final two holes. Chloe McFaddin posted 43, and Olivia Sanders struggled to a 44.

”For Addyson and Olivia, they know that’s not acceptable,” Sanders said. “Even on their worst day, they can’t shoot 16-over between the two of them for us to have a chance to beat good teams. They’ve both been solid, they’ve had some good rounds, so maybe tonight wa s a fluke thing.”

Molly Hixson paced the Artesians with 48.

BNL will compete in the prestigious Hall of Fame Tournament, an invitation-only event at the Trophy Club in Lebanon, on Saturday.