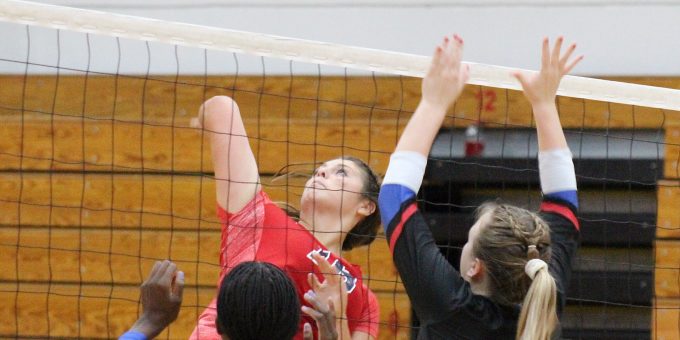 For the third time this season, Bedford North Lawrence worked overtime, pushed to a fifth-set battle. And for the third time, the Stars went the distance for a thrilling victory. Hey, if you’re going to stay up that late, might as well make it worthwhile.

BNL took control with a 4-0 run midway through the final set, and the Panthers (1-4) self-destructed with too many service errors. They were fearless in their velocity and venom from the back line, but the free points eventually added up.

Tied at 6-6 in the final set, Carlee Kern ripped an ace during the breakout, Kendall Nisley added a kill, and Bennett blasted a kill into the deep corner. The final point was a gift – the last JC serve miscue – and the Stars gladly accepted it.

“I tell you what, don’t get me wrong,” Arthur said. “Wining in five games is such a good feeling, knowing the girls can fight back, But it almost puts a bitter taste in my mouth because I know we can do it in three.”

BNL won the operating set with ease, then collapsed as Jennings jumped to a 10-1 lead in the second. Arthur’s spent two timeouts to finally stop that run, and the Stars scratched back even at 20-20. That rally was wasted as Julian Woodard blocked down a point and Taylor Mowery smashed an ace to finish a 5-0 burst.

Jennings controlled the third set, and powered to a 21-19 lead in the fourth. BNL clawed back from the brink as Deckard blocked down a point and Bennett banged a spike off the front blockers to cap a 6-0 close for the set.

“We hit the cruise button, but that’s not how volleyball goes at all,” Deckard said. “It’s a game of momentum. Once you win the first one, you have to pull through.

“At the very end, every girl is playing their hardest. That’s why we win. we give it all we’ve got.“

“Bryn really stepped it up,” Arthur said. “She’s been needing a game where she rocked it.

“Yes we’re coming back and winning. That’s awesome. It shows a lot of heart and a lot of guts. But those runs, when we get down, we’re just chasing things. I think they get caught up and overthink things. We forget how to do that basic stuff.”

BNL will compete in the Brown County Tournament on Saturday, facing Greencastle at 10 a.m. and Owen Valley at 11. Tickets are available online only at www.gofan.com. To order tickets, creat an account on fanco, search for Brown County, and click on “get tickets.”

The Stars will return home on Monday at celebrate Senior Night against White River Valley (varsity only, with the senior honors starting at 6:30 p.m.