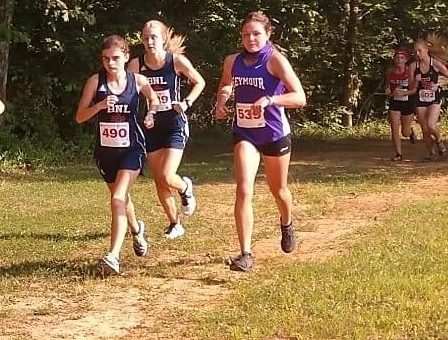 BEDFORD – Jill Vance’s shriek of joy, even muffled by the mandatory mask, spoke volumes. That’s the sound of winning, especially when it’s not expected.

Paced by the top two finishers in the field, the Stars raced to victory in the girls meet during the Scott Hiles Invitational on the BNL course Monday afternoon. Autumn Spence celebrated her personal homecoming and BNL’s premature Senior Day with her individual win as the Stars scored 58 points to edge Seymour in the eight-team field.

In the boys race, Bloomington North dominated the day while BNL settled for a respectable third place.

Spence, who moved to Colorado for her junior year, made her first race back – hopefully not her last, although that’s what the early senior celebration was for – a memorable won. She chased teammate Grace Tanksley for most of the 5K trek, finally catching and prevailing in 22:14.35.

Tanksley was second in 22:19.58, and that pair will be pushing each other all season. “Grace was basically pulling me the whole way,” Spence said. “This was really special. The girls have been working super hard.

“The key was definitely the last half of the race. That last 800 is super important because it seems like to take forever to go through the woods.”

“Seymour is usually a perennial favorite,” Vance said. “So I really didn’t think we had a chance at first place. But man, having Autumn and Grace as that 1-2 punch up front is great.

“This is really exciting. This counts as an upset. We can compete with some of these teams. It’s a huge confidence booster.”

The Owls, with three finishers in the top 6, settled for second with 64 points as Kinsley Folsom was third overall in 22:49.60. Mitchell was third as a team with 83 points.

In the boys race, North had five of the top six finishers and totaled 18 points, with Nolan Bailey claiming the individual title in 17:08.22. Seymour was second with 54, while the Stars scored 115 points.

Colton Sons led BNL, crossing in 17th place in 19:13.77. The Stars got an unexpected boost from Zane Thompson, who was the fifth scorer as he sprinted up from the usual team pecking order.

“Without him, we would have not gotten third,” BNL coach Jonathan Calhoun said. “He saved our butts today.”

“It was 100 times better than last week,” Calhoun said, comparing this event to the season opener in Terre Haute. “The times are not there – it’s hot – but it was all about the effort. Seeing almost every kid outkick someone at the end showed we were really into this. We cared about that finish, which shows the true mentality of where we’ll be in the future.

“We showed a lot of effort and grit just toughing it out.”

The Stars will split up for their next events as the girls race at North Harrison on Sept. 3 while the boys will visit Columbus North on Sept. 5.