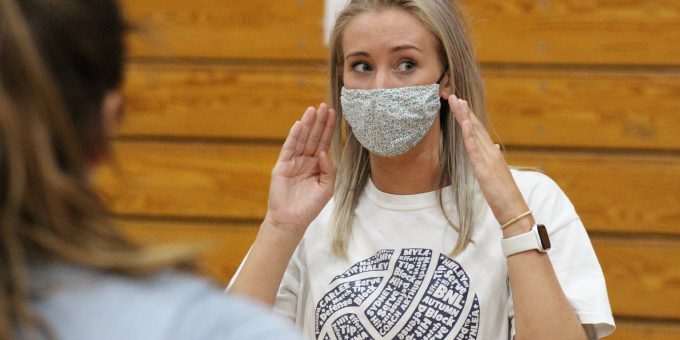 BEDFORD – The numbers tell the story. Bedford North Lawrence has nine veterans returning with varsity experience for the combustible 2020 season. The volleyball court allows only six at a time, especially under the social-distancing protocols. Somebody could be sitting and unhappy about it.

That’s a good thing. An uncomfortable seat on the sideline has been a great motivational tool for improvement since the invention of team sports. And nobody needs to show progress more than the Stars.

After back-to-back 4-win seasons, nobody is guaranteed anything. New head coach Gabrielle Arthur made that crystal clear. Losing stinks like road kill on a hot day.

“It was not even fun,” BNL senior Brynlea Bennett said. “I don’t lose well. I’m here to win.”

Arthur, young and energetic, has returned to her alma mater to correct course, to renew the passion for the game she loves among her beleaguered team. She’s all about being positive. But she’s also positive about making the necessary changes. Get it done, or someone else will.

“I’ve made it very clear every spot will be earned this year,” said Arthur, a 2015 BNL graduate who played college volleyball at Franklin. “It could vary game to game, practice to practice. It’s lit a spark in a lot of people. The people who are less competitive, this environment will force them to be. I love that.”

BNL has the necessary building blocks. The Stars return senior Haley Deckard and junior Carlee Kern, both of them earning Honorable Mention status on the Hoosier Hills Conference squad last season. Deckard led the Stars in digs (259) and blocks (55) while also totaling 159 kills. Kern recorded a team-high 172 kills with 242 digs as BNL finished with a 4-22 mark.

“There is definitely competition for spots, and any competition makes the team better,” Bennett said. “We have multiple girls practicing every single spot. It’s going to be different. We have a new coach, a new team. It’s a different atmosphere. Everyone wants to win.”

“We’re all really excited about it,” Gipson said. “We hate losing. I get real angry when I don’t play well.”

Tryouts were tough. Arthur made choices with this season – and the next three years – in mind. Now the focus shifts to those with experience to set the tone and remember what success feels like. Double-digit victories would be a nice start.

“There are some veterans out there,” Arthur said. “They know what they bring to the team, They can look around at other people and make them better. The girls that have a lot of playing time are really good about saying things. While the girls respond well to the coaches, they respond almost better to another player. So I’m putting pressure on them as a leadership role.

“We’re going to go into the gym, put everything aside, and every single practice is going to be positivity. And it radiates in our practices. They have a different mindset. They’re ready to work, ready to go.”

They will go to work under new rules after the IHSAA issued guidelines for the COVID era. Teams will not switch benches between sets, bench personnel will be encouraged to distance, masks will be required for those not in the match, gloves will be allowed. Attendance will be limited to 250.

The Stars will open the campaign on Aug. 18 against Mitchell.