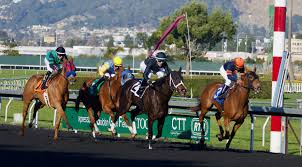 (INDIANAPOLIS) – Attorney General Curtis Hill said in an advisory opinion this week that Indiana law permits the Indiana Office of Technology (IOT) to license its internally created horse-racing application to other states.

IOT’s Application Development Team was recently commissioned to create an app for the Indiana Horse Racing Commission. The app, which is used by both the public and commission staff, has streamlined the commission’s regulatory processes and brought additional transparency to Indiana horse racing. Other states have expressed interest in licensing the app from IOT, and IOT has reciprocated that interest.

Attorney General Hill issued the advisory opinion in response to an inquiry from IOT, which asked if Indiana Code permitted the office to license this app to other states.

“IOT has developed a solid horse-racing application that is grabbing the attention of other states. Legally, IOT is welcome to pursue any opportunities to license this app to states that see the app as a tool that can improve their horse-racing practices,” Attorney General Hill said.