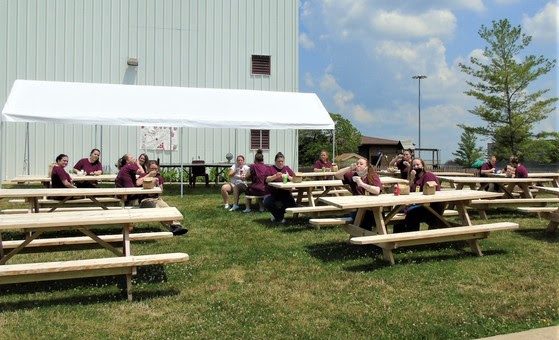 (ROCKVILLE) – Warden Julie Stout, along with other staff at the Rockville Correctional Facility (RCF), held an appreciation event this past week to recognize a year’s worth of good behavior for 267 offenders, which is about 25% of the offender population permanently housed at the facility.  To qualify for the event, each offender must have been at the correctional facility for an entire fiscal year (July/June) and have no Offender Conduct Reports (OCR) on file for the previous fiscal year.

Correctional staff will issue an OCR when an offender fails to follow or abide by rules of conduct designed to enable the prison population to coexist peacefully.  When offenders follow facility rules it allows staff to spend more time on constructive engagement with offenders and less time documenting violations which result in  disciplinary hearings and reviews.

“I have always believed in positive reinforcement of good conduct and behavior” said Warden Julie Stout. “An offender’s good behavior over a 12 month period is worthy of reward like this annual picnic.”  Warden Stout concluded, “This event, as well as our many life skill programming services, are part of the larger strategy and goal to help prepare each of these women for successful reentry into society.”

The recognition event is held in July of each year to coincide with our nation’s independence day celebrations and also serve as a symbol of the freedom one can achieve through good behavior and making good choices.

All supplies for the event were paid for with funds generated from offender commissary sales.  There was no cost to Indiana taxpayers.