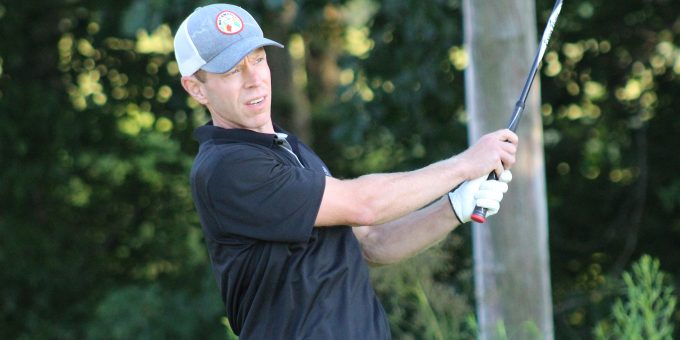 BEDFORD – Jansen Perdue has always been ‘the other guy’ among the contenders for the title he cherishes. Somebody with his overall resume – a handful of top-5 finishes, three appearances in the final group – should come to mind quicker.

Now he’s halfway to being “The Man.”

Perdue, one of those Otis Park clubhouse brats who grew up on the course, matched his best tournament score with a 4-under 68 and roared to the top of the leaderboard in the Bedford Men’s City Tournament on Sunday morning.

Perdue finished 36 holes with a 2-under 142 total, two shots in front of two-time defending champion Aaron Harrell at the event’s midpoint. First-round leader Michael Gratzer survived one startling hole and battled back with late birdies to settle into third place, three shots off the pace.

It sets up a dramatic second weekend as Perdue chases coveted admission into the Champion’s Club, with Harrell seeking a threepeat and Gratzer in position to claim his sixth (and first since 2004).

Perdue, a 2001 Bedford North Lawrence graduate, reached this point with a thrilling finish to the second round, three consecutive birdies on holes 15-17. He carded six total birdies, putting like a demon from 10 feet or closer.

“It means I’ve got a shot,” Perdue said. “Going into next weekend, there is no pressure. It’s just playing golf with my friends, that’s what it’s all about. As long as I have fun with it, that’s the best chance I have.”

Perdue torrid conclusion was actually set up earlier in the round, when he erased two bad shots with a 12-footer for par on the ninth green. He chipped in for birdie on 11, salvaged a bogey with a lengthy putt on the 12th. Then, still tinkering for grip comfort, he stumbled on a swing key that worked.

“I can get around Otis Park, but I didn’t feel comfortable over two days until the 15th hole,” he said. “I just felt something with my grip that felt good, and I got it going.”

“I’m right there,” Harrell said. “I hit the ball better today but didn’t score as well as I probably should have. But it’s a four-round tournament. There’s a lot of golf left. It’s just fun to see everyone playing well.”

Gratzer, who slept with the overnight lead after his opening 69, was rustled wide awake on the 8th hole, when a tee shot over the stone wall and a shanked shot after the reboot led to a jarring 8 on the testy par-4 hole. He recovered with two birdies over the final three holes and signed for a 76.

Others still within striking range, now that Harrell isn’t rewriting the record books, include Ken Steward (75-73), Michael Bellush (75-74) and Mark Taylor (76-73). Kyle Ray and Koby Robb, who both fired 72s in the first round, drifted back with 78s in Round 2. The cut for the Championship Flight (the top 13 in the field) came at 153.

Perdue, a little guilty of self-deprecation, will now be a focal point in the final group.

”I’ve had a lot of back-door thirds in this tournament,” he said. “I don’t know that anybody knew it. Any time I‘ve been in the final group, I’ve been like 8 back and trying to be a good sport to get out of everyone’s way. I just kind of hang in there.

“I haven’t been shy about saying I want to win the tournament. When you think about me growing up there, and some of the people who taught me how to play golf, all these guys have won it. So it would be amazing if I could win it just one time.

“The tournament means a lot to me for a lot of different reasons. I’m not going to lie. But that being said, I don’t feel like I have to win it. That would be wonderful. But no pressure. I’m just excited to have a chance.”