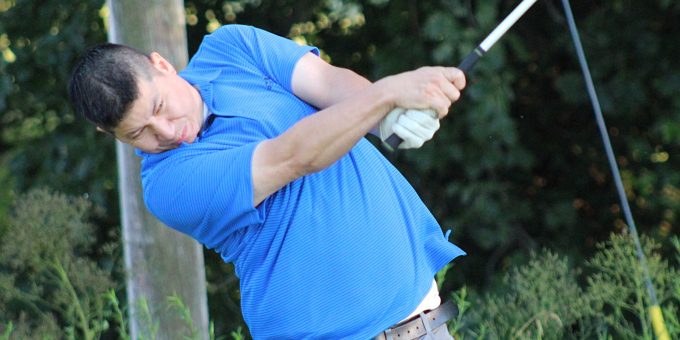 BEDFORD – Michael Gratzer, a former Kansas resident, found out there is definitely no place like home.

After six years in Oz, the former Bedford North Lawrence wizard and five-time City champion clicked his golf shoes and came back to familiar territory, leading the Bedford Men’s City Tournament after Saturday’s first round at Otis Park.

Gratzer, who set a City record while winning his handful of titles in consecutive years (2000-04), fired a 3-under 69 to claim a three-shot lead over two-time defending champion Aaron Harrell, former BNL standout Koby Robb and Kyle Ray after the first of four rounds.

After a nervous bogey on the opening hole, Gratzer steadied into his old form, carding four birdies on the back nine and taking the lead when Harrell cooled off after a blazing start. The course has changed (back-nine greens have been reworked) since Gratzer dominated the event, but that family name atop the leaderboard rekindles a lot of memories.

Don, the father, won the City eight times. David, the elder son, won it four times. Michael’s return to the scene of his own conquests is a welcome homecoming, although this isn’t the kid who could overpower the course and flick on his skills on a whim. That young man didn’t have much fun, even in triumph. The leader is loving this.

“I put a lot more pressure on myself, I didn’t enjoy it as much,” Gratzer said. “That’s probably why I didn’t end up trying to pursue anything in golf. But when you’re away from it for a while, you see that you were missing.

“I’m just trying to enjoy it, just to be back and play golf with some of my friends. That’s the main thing that helped me. It’s great to be back out there.”

After the bogey on the benign first hole, Gratzer played the next 14 holes in 5-under. His weapon was his putter, especially when he made three birdies in a four-hole stretch (holes 12-15). It was not from memory. Every one of those greens have been revamped in recent years.

“It’s a lot different,” he said. “It’s not the course I’m used to playing, since they’ve changed some greens. It’s a different course, for sure. I used to be able to read these greens blindfolded.

“I am surprised, because I hardly play. I didn’t hit it very well, but I made a lot of putts, which always helps. It took me a few holes to get comfortable. I haven’t played any kind of competitive golf in three or four years.“

His late stumble on the par-5 17th (a tee shot ripped left into the creek) was erased with a closing birdie on the new-look 18th green.

Harrell, who torched the field with record-setting scores the last two years (22-under 266 in 2018, breaking the old mark by a whopping 13 shots and leaving the nearest competitor in the dust by 24 strokes), opened in the same style, recording four birdies on the front to make the turn in 3-under 34.

Alas, he faltered in the heat as his putter balked. Harrell bogeyed four of the last 8 holes, and now the defender is in a pursuing position for the first time in a long time.

“I just got tired, honestly,” Harrell said. “I made some putts on the front, but on the back it went the other direction. I didn’t get putts to fall.

“I don’t get upset, I will take whatever I get. I just need to hit some better shots.”

Gratzer, even from long distance, had heard of the Harrell tornado the last two summers. Playing in the opening foursome with his former BNL teammate, he wanted a front-row view.

“What he did the past two years is amazing,” Gratzer said. “To shoot what he shot, that’s crazy good. To hear about it was jaw dropping. I’d kind of like to see it.”

It’s not yet a two-man race, not even close as Robb and Ray cruised home in even-par. Jalen Hodges settled four off the pace with a 73, while former BNL standout Daylen Tidd is among a trio at 74 (with Jansen Perdue and Jason Terrell) heading into Sunday’s second round.

Anything can happen over 54 holes. Gratzer doesn’t plan to change strategy based on his current status.

“Staying the same, just enjoying it and having fun,” he said. “I know I will hit bad shots. I just have to take them for what they are.”

Second-round action will begin at 8 a.m. The third and fourth rounds are set for July 18-19.