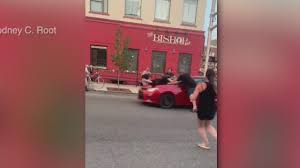 (BLOOMINGTON) – Two people were injured at a Black Lives Matter protest in Bloomington as it was ending Monday around 9 p.m. on Walnut Street.

The protest was in response to the attack on Vauhxx Booker at Lake Monroe on the Fourth of July.

In a short video posted on Twitter, a red vehicle can be seen speeding down a road with one man holding onto the driver’s side door and woman on the hood of the vehicle.

The car proceeded down Walnut Street to the intersection of Walnut and Sixth Street, where the car turned and both people were thrown from the vehicle.

Police say the incident is under investigation.