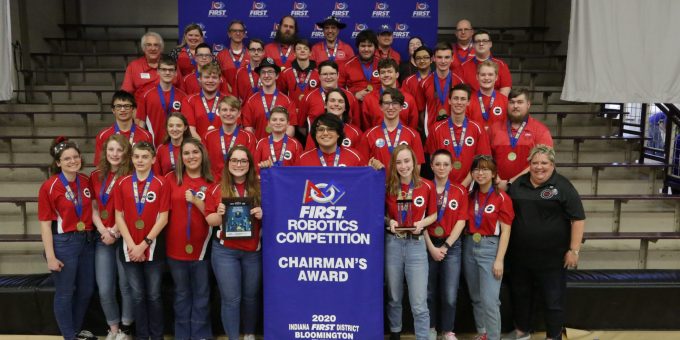 FIRST Robotics Competition decided to select winners for the “most prestigious” award in FIRST after suspending the season and eventually canceling the season due to Covid-19.

Teams submit essays describing their community outreach and impact over a sustained period of time, not just one season. At competitions, teams give presentations and address questions from judges. With the suspension of the season, winning teams for each district competition were selected from their essays. The four district winners were then interviewed via video call with judges and a state champion was then selected after deliberation.

Red Alert Robotics is in its 15th year of competition and this makes its 7th Chairman’s Award. The presenters sited their STEM summer camps, assisting the White River Fire Department with repairs to their remote control safety dog, hosting multiple robotics competitions of every level of FIRST, and their close ties to IndyCar® driver Charlie Kimball that has helped make FIRST® more visible.

Red Alert Senior and Team Captain, Chase Rivas said, “As a graduating senior on Red Alert, it’s awesome that we were able to win Chairman during my last season. We have put in so much hard work over the past four years and it’s luckily accumulated to this. We are all so excited that our hard work was realized even during these uncertain times.” Chase is heading to IU Bloomington to study Computer Science at Luddy and received a FIRST Scholarship from IU Luddy.

Red Alert Senior and Award Presenter, Meredith Fain said, “Winning the State Championship Chairman’s award is an incredible honor. During these uncertain and hard times, it’s exciting to be recognized for the work we dedicated this past season, and the passion for future seasons to come. In my three years on Red Alert, we have won the state Chairman’s award twice, and I am blessed to have been a part of the presentation team and to have won during my senior year.” Meredith is heading to IU Bloomington to study Computer Science, Cyber Security, and Global Policy at Luddy and she also received a FIRST Scholarship from IU Luddy.

“Red Alert is honored to be chosen for this prestigious award. Our team has put in a lot of hard work over the years, and we love to see the world of STEAM grow each year. We have a lot of big things planned for the future and can’t wait to see where it takes us!” Rachel Miller, Mentor, Red Alert Robotics.

Award Description from Website
“The Chairman’s Award is the most prestigious award at FIRST, it honors the team that best represents a model for other teams to emulate and best embodies the mission of FIRST. It was created to keep the central focus of FIRST Robotics Competition on the ultimate goal of transforming the culture in ways that will inspire greater levels of respect and honor for science and technology, as well as encouraging more of today’s youth to become science and technology leaders.”

Four FIRST Robotics Competition Teams were selected as District Chairman’s Award winners earlier in the Spring after the suspension of the season. Teams were interviewed via video call to determine the state champion.

The four district winning teams have made lasting impacts on their community, the state and the world. From hosting all-girls robotics competitions, mentoring elementary school robotics teams, and creating assistive technologies for students in their communities, these teams have shown that FIRST is “More than Robots.”The four district Chairman’s Award winning teams were:

FIRST® robotics competition combines the excitement of sport with the rigors of science and technology. Under strict rules, limited resources, and time limits, robotics teams of 25 students or more are challenged to raise funds, design a team “brand,” hone teamwork skills, and build and program robots to perform prescribed tasks against a field of competitors. These competitions create “real-world engineering” experiences for all participating students.