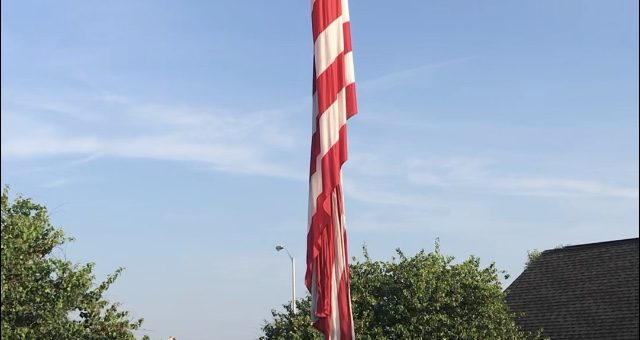 (BEDFORD) – Since 1988, the Bedford Golden Corral has honored veterans with free breakfast on July 4th.

In 1988, they dedicated a monument along with one of the largest flag displays in Lawrence County.

On Saturday morning, veterans, their families and community members came to the flag-raising ceremony to honor those who have served.

“This is one of my favorite things to do; this is a small sacrifice, compared to the freedoms we have because of these men and women dedicating their lives to serve. They have sacrificed a lot as well as their families so we can enjoy what we have in the United States,” said Bedford Golden Corral Manager Ronnie Nubbie.

The flag raising ceremony lasted less than thirty minutes with Pastor Bob Courson from the Mitchell First Church of God opening up with a prayer.

The flag-raising was done with the help of Ronnie Nubbie, Jeff Westfall and the American Legion Post #33 Honor Guard. The Honor Guard performed a 21 Gun Salute, with the Pledge of Allegiance led by World War II Veteran Lee Hutchinson.

All local law enforcement officers were recognized with the officers from Bedford City Police Department and the Lawrence County Sheriff’s Department represented during the event.

A check for $2,000 was presented by Bill Henry Post Commander of Mitchell VFW Post 9107 to Golden Corral Manager Ronnie Nubbie for Camp Corral.

YMCA Camp Carson in Princeton, Indiana provides children of a parent that was killed in action or disabled a fun weekend, with other children whose lives were impacted in the same way.

“I volunteered at the Camp Corral in Pennsylvania, and it’s amazing the transformation of children who start out the first day on camp feeling isolated. But, when they leave they have made new friends and worked together with the many team-building exercises built into the program,” Ronnie Nubbie added.

Camp Carson has many activities for youth to take part in from zip lines, flying from the blob, riding a horse or dirt bike, pottery, archery and more.

Bedford Mayor Sam Craig made remarks on how our community is grateful for the many men and women who serve and the sacrifices they and their families have made to keep our country protected.

Keynote speaker Terry Sanders spoke about the nation’s birthday. Here are some brief exerts made from his speech.

“No matter what you call it, it is a date that binds Americans of all stripes together. We honor and remember the Declaration of Independence, our nation’s founding document,” noted Sanders in his speech.

“Without the brave not quite-yet Americans fighting on behalf of a nation, whose Declaration was still a year away, the word’s Jefferson famously wrote would ring hollow. Without the assurance that blood would be shed in her defense, America very well may have remained as lifeless as the sheet of paper carrying her birth,” Sanders continued.

“For the troops serving in Washington’s largely untrained army, a declaration of independence meant they would not be fighting for the defense of their colonies, but for the birth of a new nation, for a new way of life where they, and only they, would control its direction,” said Sanders.

Jack Voigtschild, who is also a Purple Heart recipient, concluded with a closing prayer.

Many of the regular 4th of July events were canceled this year due to the COVID-19 pandemic. However, Veterans Service Officer Brad Bough wanted to make sure this event did not get canceled.

“We are grateful to Golden Corral for everything they do for our area veterans,” said Bough.