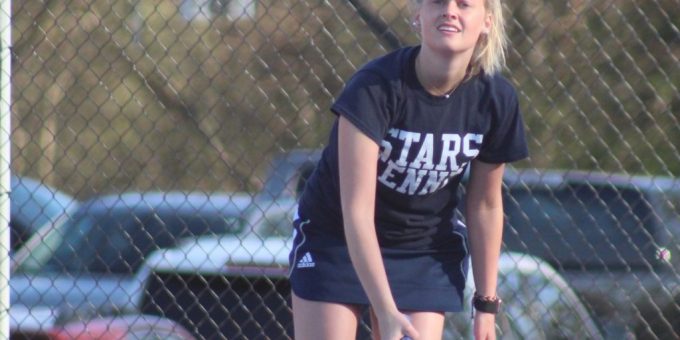 BEDFORD – Before she reports to Lackland Air Force Base in San Antonio, before serving our country for the next four years, Bedford North Lawrence’s Abbey Bridges wanted one more serve. After suffering through the worst, she deserved that.

Bridges, and her five tennis teammates, finally got her wish.

While nothing can reverse the lost 2020 spring season, erased by a virus and its consequences, Bridges and the Stars were granted some sense of closure on Monday evening. They celebrated Senior Night – two months late – on the asphalt courts that have been silent since the impact of COVID-19 hit like a deep-space meteor.

“It’s a big deal,” Stigall said. “We’ve taken a lot away from them for way too long. We had no choice. We had to do this, at least put a finale to their four years.”

For the other five, goodbye means college. For Bridges, it means much more. Her next stop is basic training, nine weeks of torment and teaching. How hard can it be? She’s already been through it, quarantined and confined to her home for weeks. When the Air Force orders you to not get sick, you obey.

“Quarantine sucked. It completely sucked,” Bridges said, expressing the view of her generation. “I wasn’t allowed to go anywhere. If I had caught COVID, I would have been taken out of the rotation and would have had to start over again. They told me I couldn’t get sick.”

The loss of her senior season was sickening enough. All the prep work, all the goals and dreams, went for naught when the IHSAA cancelled spring sports on April 2.

”This was our year, I really felt like that,” Stigall said. “The six seniors were at that point, we worked so hard from last year to this year. We were so excited and we expected a lot. And then to not get it was frustrating, it was sad. It was everything.”

So this belated senior recognition was important. Perhaps not in the big-picture sense of a pandemic, when people suffered great loss across the globe, but in the snapshot glimpse of six teenagers, with their lives ahead, it was noteworthy. It was appreciated, not just for the gift baskets and the applause from family and friends.

“It was important,” Bridges said. “I wanted to say goodbye to everyone before I left, see Joni and Jason (Stigall, Joni’s husband and assistant coach) again and thank them for the four years.

“Tennis taught me not to overthink everything. I used to be super competitive and get so upset with myself if I made a mistake. Joni helped me to not freak out over every little thing.”

Bridges has been destined for the Air Force since the second grade, when a long conversation with a female airman during a Veteran’s Day program steered her that direction. After she completes her nine weeks of basic, she will become a member of the security forces. She hopes to attend the postponed BNL graduation ceremony (now set for July 24) before boarding a plane for Texas.

“I’m more nervous about leaving my family,” Bridges said. “I’ve never been away for more than a week. I’m a homebody. I like to be around someone I know.”

For her Senior Night, she was surrounded by family, both immediate and extended. The Stars played some informal tennis with parents (some of whom lasted only a few minutes in the blast-furnace heat of a July late afternoon as the temperature on the courts approached the surface of the sun) and got that last serve. They aced it.