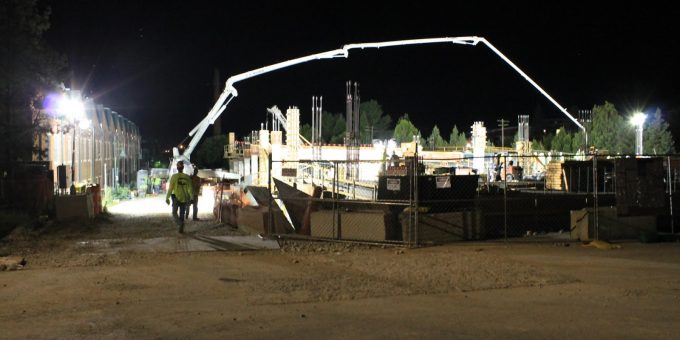 (BLOOMINGTON) – The construction season is in full swing in Bloomington with improvements to city streets, parking facilities, and bicycle/pedestrian infrastructure proceeding in compliance with current public health guidelines.  City employees are practicing and working with contractors to implement CDC protocols regarding physical distancing, face covering, hygiene, and disinfection of vehicles and equipment to protect workers engaged in these projects and prevent community transmission of COVID-19.

The City’s two garage projects are proceeding at the Trades District and on Fourth Street. The first elevated parking deck of the Trades District Garage was poured last week, with remaining  deck pours scheduled to occur weekly through July and into August.  The below-grade concrete work is complete.  In addition, the City has selected a brick mix for the garage’s exterior intended to complement the variegated brick facade of the Showers Building and other historic structures in the vicinity.

Ongoing concrete work will entail frequent concrete deliveries, requiring occasional closures of West Tenth Street between Rogers and Morton.  Drivers, cyclists, and pedestrians are advised to find alternate routes, and to exercise caution when entering the area.   Located just south of Tenth between the Showers City Hall building and the B-Line Trail, the Trades District Parking Garage will add 350 spaces to the inventory of parking spaces downtown upon scheduled completion in spring 2021.

The Fourth Street Garage site will activate soon, with preparation of the site and construction of the foundation piers and elevators scheduled to commence in early to mid July.  The City is expecting to receive bid award recommendations from the project’s construction manager this week for the final scope of work for the garage, and award a contract as soon as next week.  During construction, the westernmost lane of Walnut between 3rd and 4th Streets will be closed to traffic, as during the demolition of the previous structure.  Once underway, the project to construct the 500-plus-vehicle facility should require 12 months to complete.

Soon-to-be-installed webcams will give residents the opportunity to observe the progress of construction at both sites from the City’s website. The Fourth Street Garage and the Trades District Garage will be the first two garages in Indiana designed and built to achieve Parksmart-certification, based on compliance with guidelines that reduce environmental impact, increase energy efficiency and performance, and manage parking spaces efficiently.

Installation of several multiuse paths is ongoing on the east side of Henderson Street from Winslow Road to Hillside Drive, on the north side of Winslow from Henderson to Highland Avenue, and on the north side of Rogers Road from High Street to The Stands Drive/Winding Brook Circle. The third project will also provide an improved pedestrian crossing of Rogers at The Stands.  Please consult the City’s engineering projects page for more information about the Henderson Street multiuse path, the Winslow multiuse path, or the Rogers Road multiuse path. These projects are scheduled for completion November 2020.

The 2020 paving and concrete/curb repair season continues this week with paving along South Meadowbrook Drive from East Third Street to the street’s southern end. Sidewalks are being installed this week along East Tenth Street from North Forrest Avenue to North Walnut Grove Street.  This year’s proposed paving schedule is mapped at this link.

The Indiana Department of Transportation (INDOT)’s resurfacing/reconfiguration project on East Third Street between College Mall Road and State Road 446 continues this week with the application of pavement markings on the recently repaved road.  The roadway will be reconfigured between Clarizz and S.R. 446 to include a center turn lane, with one travel lane in each direction. Bike lanes will also be incorporated on each side. The project is scheduled to be completed by August 2020.  More information about the project is available through INDOT at in.gov/indot or 1-855-463-6848.

More information about current City-led infrastructure projects is available here.  When encountering improvement projects, drivers should travel slowly, cautiously, and distraction-free through the construction zone and be attentive to lane changes for their safety and that of the workers.