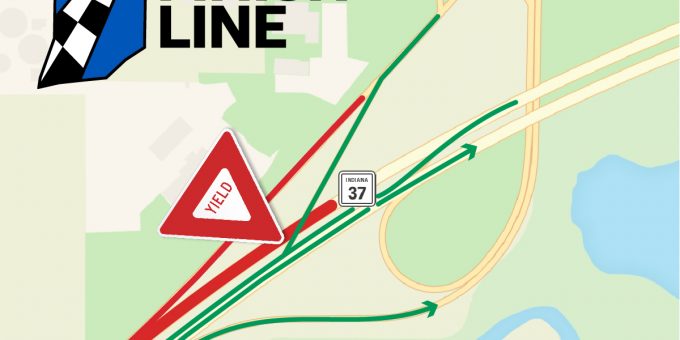 (MARTINSVILLE) – Demolition work is underway and crews are starting to rebuild the southbound lanes of State Road 37 between State Road 39 and Liberty Church Road.

The Indian Creek bridge has been demolished. The new lanes will be in use during next year’s temporary closure of State Road 37 between State Road 39 and Morgan Street. Traffic shifted last week.

The right lane is exit only onto S.R. 39/Morton Avenue and S.R. 37 is reduced to one lane past the exit. This phase of work and traffic configuration will last a few months.

Stop signs east of Artesian Avenue have been removed. You’ll find 2-way stops instead of a 4-way stop near Walmart and the shopping center. The update should help keep traffic moving in the area.

A left-turn lane has been added on northbound S.R. 67 at Crosby Road. The turn lane is another improvement to help safely move traffic during next year’s temporary closure of S.R. 37.

Crews are ramping up work on S.R. 37 and drivers should stay alert and slow down. Drivers moving through the construction at Perry Road need to be aware of the work underway near Whiteland Road. A 45 mph speed limit extends from the south end of the I-69 Finish Line project at Indian Creek to Waverly Road.Perry Road closed early last week between Perry Lane and S.R. 37.

Traffic is detoured over New Harmony Road and Cragen Road to S.R. 37. A temporary access point connects Lincoln Road with S.R. 37. Lincoln Road traffic wanting to travel south on S.R. 37 is encouraged to use caution and make a U-turn at Big Bend Road.

Expect daily single lane closures between 9 a.m. and 4 p.m. on S.R. 37 near Egbert Road, Perry Road and Waverly Road where new bridges are being constructed.

Traffic is scheduled to be stopped on S.R. 37 to remove overhead power lines at four different locations – Cragen Road, Egbert Road, New Harmony Road and Perry Road. The closures will be short term (5-10 minutes) with the work tentatively scheduled for Thursday, June 18.

The temporary closure of Mahalasville Road south of S.R. 37 won’t happen until later this month and will last about five days.

Drivers will use Burton Lane and Southview Road to access Mahalasville Road from the west.

The new traffic signal at S.R. 144 at Mann Road/Centenary Road is expected to be activated in the coming weeks. As a reminder, the new signals on S.R. 37 at Banta Road and S.R. 144 at Old S.R. 37/N. Waverly Park won’t be in use until they’re needed to help safely move traffic during construction closures.